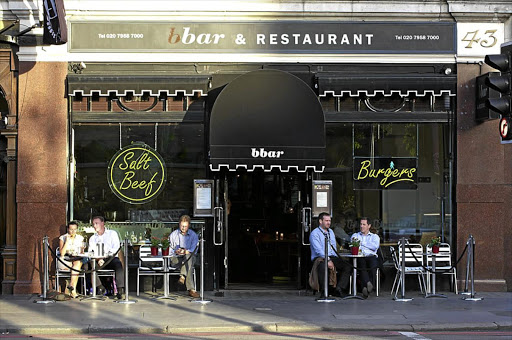 So appealing is her spread, standing in the shadow of Buckingham Palace, that it's lured the likes of Prince Harry and Penélope Cruz.

Hotelier Beatrice Tollman - she who owns 17 uber-luxurious boutique hotels, among them the Oyster Box and Twelve Apostles - has most of London salivating over bbar, a split-level cocktail bar and restaurant and its South African influenced-fare that includes bobotie, spring rolls, boerewors and pap and wild boar burgers.

It's been 12 years since bbar, named by husband Stanley as a tribute to Beatrice's home-grown recipes, arrived on the London gastronomy scene and it's got Londoners salivating for South African favourites.

"There seems to be a demand for South African cuisine in London. At the bbar there is a huge demand for bobotie, SA style Cape Malay curries, biltong, boerewors and avocado-based salads," said general manager Ian Powrie.

The Tollmans have had a long history in the restaurant world and it all started in South Africa. Their Red Carnation Group boasts luxury hotel establishments in parts of the UK, the US, Switzerland and South Africa.

"Mrs T, as she's affectionately known by her staff, did all the cooking and 'hard work' while Mr T gained the kudos," said Powrie.

"Years later Mrs T had built up a portfolio of 17 internationally renowned hotels and Mr T bought bbar to showcase Mrs T's recipes and say 'thank you' for all her hard work in those early years."

Powrie believes the establishment encapsulates the Tollmans, and their personal touches can be seen throughout the restaurant.

Upmarket clientele visit bbar at any time of the day - they cater from breakfast to lunch, and from cocktails to afternoon tea. There's even a pre-theatre offering.

As a precursor to the dishes on the a la carte menu, bbar offers its patrons "while you wait" snacks including traditional beef biltong "dried and seasoned South African style".

Prices aren't cheap according to South African standards - you pay about R97 for a starter, more than R300 for a burger, nearly R500 for a main meal and South African cocktails like "Bushveld Martini", made from Lovoka chocolate vodka and Amarula, are selling at close to R200 each.

On the dessert front the honeycomb ice cream and rice pudding have proven popular choices.

In keeping with the Tollmans' philanthropic inclinations, for selected dishes a pound is donated to charities of their choice including Prince Harry's Sentebale Charity in Lesotho.

Prince Harry has visited bbar as a guest of son Brett Tollman to support the company's charity, the Treadright Foundation.

Since bbar opened, it has donated about R1.3-million to various charities.

There are no plans to open more bbars. "Mr T says if he was young, he would consider it..." said Powrie.

• Visit bbarlondon.com to check out the menu.