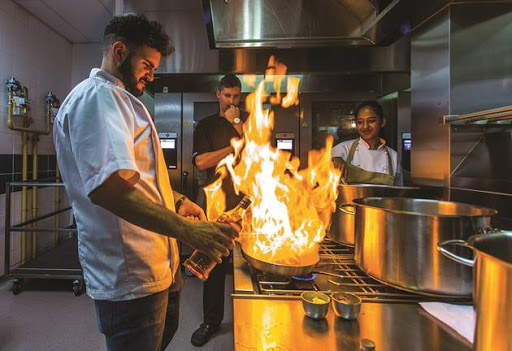 J’Something gets fired up about cooking the kitchen of his new Pretoria restaurant.
Image: Donovon Thorne

One of South Africa’s most renowned chefs will join J’Something as judge on M-Net’s My Kitchen Rules SA.

Chef and restaurateur David Higgs‚ a multiple winner of South African chef of the year‚ the culinary Olympics and the culinary world cup‚ is no stranger to television‚ having appeared as a guest chef on more than one season of M-Net’s MasterChef South Africa.

The reality cooking show is based on the Australian format of My Kitchen Rules where each pair of home chefs competes by preparing three course meals in their own kitchen and then hosting the judges and the other contestants. Pairs may comprise friends‚ colleagues or family.

On being a judge on M-Net’s My Kitchen Rules‚ Higgs - who owns Marble restaurant in Rosebank’s Art Mile - says he is a great fan of the show.

“I love the format of the show and the fact that it offers the viewer more than just cooking. I think the sense of drama and the emotions from the teams will give the viewers lots to be entertained by.”

Last week it was announced that J’Something‚ vocalist and guitarist with the award winning house band Mi Casa‚ would be a judge on the programme. He has a restaurant and has previously hosted his own food show on TV.

He said that he “couldn’t wait" to co-judge with Higgs. “We have a great relationship; we have been friends for a while and have a great energy. We will bring diversity to the judging which means it will be well balanced.”

The show will be broadcast on M-Net channel 101 from August 2017. The winning couple will be awarded a cash prize.

• READ MORE: What's on the menu at J'Something's new restaurant?

So what will the judges be looking for?

Higgs says a crucial factor is team work. “When one team member is down‚ it’s up to the other one to pick up the pieces and vice versa – that is essentially what a kitchen is all about.”

For J’Something it’s about cooking with passion and honesty. “Don’t be pretentious‚ don’t be something that you are not. And food with a story is a winner. A plate a plate of food is a plate of food but with meaning attached it tastes a little bit better.”

Auditions take place at the International Hotel Schools in both Durban and Cape Town this weekend.

Competitors need to bring a cold dish of their choice - which can be a starter‚ main course or dessert – which they will have the opportunity to plate up at the venue. - TMG Digital/TimesLIVE