Vegans rave about aquafaba, but does this egg substitute actually work? 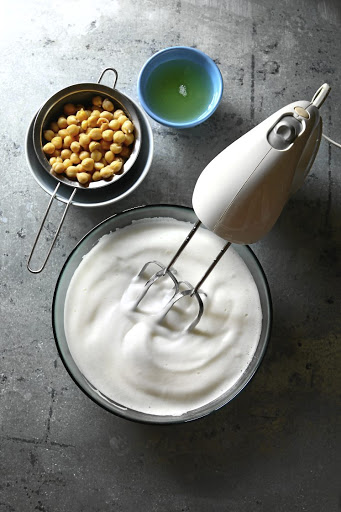 Aquafaba can be whipped up just like egg whites. The secret is to add a pinch of cream of tartar to make the mix more stable.
Image: 123RF

For all the world the word aquafaba could easily be thought of as something associated with water, swimming maybe, yet it's a fairly new cookery term used to describe the starchy liquid found in canned chickpeas (and other pulses) that can successfully be used as an egg-white replacement in baking and emulsions like mayonnaise.

The liquid, an almost egg-white consistency, contains carbohydrates and proteins leeched out during cooking. It is valuable in that it's a great binder that magically whips up to a foam that holds its shape (adding a pinch of cream of tartar makes it more stable).

WHAT CAN YOU MAKE WITH IT?

Aquafaba can be used to make meringues, muffins, macarons, chocolate mousse and brownies - even marshmallows.

Experienced "aquafabas" even make an acceptable, so they say, vegan mozzarella-style cheese.

Experts say the liquid from canned chickpeas (or chickpeas cooked up at home) works best, even delivering a good crumb and lift, usually provided by raising agents, in baking.

HOW DO YOU USE IT?

Shake the can well then drain the contents (use brine without any added salt) through a sieve into a container.

I was inspired by two websites that offer a variety of recipes using the magical brine, lovingitvegan.com and asaucykitchen.com, to make meringues and chocolate brownies (see recipes below).

When making the meringues, I discovered that if you whip the aquafaba with a pinch of cream of tartar it turns from a beige murky liquid into a super white glossy mixture with soft peaks — just like egg whites.

I made the mistake of leaving the meringues out to cool down and by the morning they had softened but returned them to the oven for 10-15 minutes to dry out. Tip: Store them in an airtight container.

The brownies were a great success. Moist and delicious they could easily pass off as a normal brownie.

Thought it was impossible to make delicious meringues without eggs? All you need is the brine from a can of chickpeas
Lifestyle
3 years ago