Another slice of TURKEY 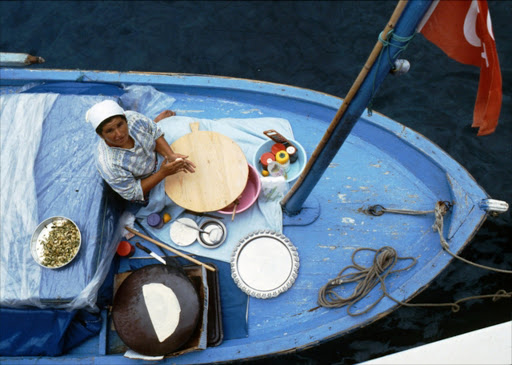 Loraine Maritz does hammock time on the Turquoise Coast

‘MOST of my treasured memories of travel are recollections of sitting,” said the Canadian writer Robert Thomas Allen. When I think back of my most recent trip it is the memory of swinging in a hammock that comes to mind — a hammock filled with plump kelim cushions in the shade of a chestnut tree.

I could hear overripe mulberries dropping on to the patio and the clanging of goat bells on the hillside above me. A bull snorted in the next-door field.

This was Kayaköy, a remote village in Turkey. We had spent the previous week in Kusadasi on the Aegean. It was a good base from which to explore, but it is also tourism madness, where massive cruise ships disgorge thousands of tourists daily to visit Ephesus, the travertines at Pamukkale and Hierapolis. So if you want to run, where can you go?

Our next destination was 200km west along the spectacular southwest coast of Turkey, also known as the Turquoise Coast — aqua ocean and romantic beaches, numerous islands, rocky cliffs, pine-clad mountains. It’s so popular that Fethiye-Öludeniz was recently chosen as the best tourism centre in the world by two British newspapers. The chances to hide looked slim.

But we removed ourselves from the crowds and based ourselves in Kayaköy, which hides in the in the Kaya valley between Fethiye and Ölüdeniz.

Kayaköy is not one town — it has a ghostly twin. On the hill above the village are the ruins of Karmylassos, a bustling town which had been inhabited by Greeks since the 11th century. At the end of the Greco-Turkish War of 1919-22, a treaty was struck between the Turkish and Greek governments whereby Greek orthodox citizens of Turkey, and Muslim citizens residing in Greece were subjected to a population exchange. The Turks in Kayaköy helped their neighbours, with whom they had previously lived in harmony, to pack up and leave, and then they turned their backs on the town. Some say the Turks did not want to live on hilly Karmylassos, but it is also whispered that it would be bad karma.

Karmylassos is now a ghost town where the remains of the 3500 identical square houses cling to the hillside. We scrambled up the narrow paths to the derelict churches, the roofless houses and the ancient water cisterns. Sunrise and sunset light the town in pinkish hues that are both eerie and enchanting.

In Kayaköy life goes on. The people are extremely laid back. The daily workload is distributed in a way most men would envy. They gather at the local cafe — or any place with a table and a couple of chairs with some shade. And there they smoke, play backgammon and dice and shoot the breeze, drinking tea in dainty tulip-shaped glasses.

On an early morning jog, I came across a beautiful young woman, baby in a pouch resting on her pregnant tummy, a toddler toddling along behind, while she herded goats along the dusty road. She was wearing traditional clothes — salvar (baggy trousers), a long-sleeved blouse and a headscarf. And she looked happy.

Communicating in a small village is difficult. My attempts at basic greetings and thank yous rendered surprised stares and could possibly have been interpreted as abuse. So I stuck to sign language and smiling and immediately befriended anybody that could speak some English.

I have never experienced so much warmth from the locals in a foreign country. One evening when leaving the restaurant we backed into another car, which was sturdier than ours and subsequently not damaged at all. The dent in our rental was the size of a small watermelon. While I stared despondently at it, the restaurateur appeared, made sympathetic clucking noises and gave Hank a reassuring pat on the back. The next morning, the dent was gone. When we eventually located our well-wisher, he just shrugged and offered us tea.

Kayaköy was the perfect base from which to explore. We tried to unravel the layers of the ancient cultures of the Hittites, the Lycians and Carians, who built nearby Xanthos, the ancient capital of Lycia. There were also the wonderful rock-cut tombs in the sides of cliffs where the Lycians buried their dead.

Ölüdeniz is synonymous with the Blue Lagoon and it was everything the posters promised it would be — an enclosed pool behind a natural sandbar with the bluest, clearest water imaginable. Enthusiasts say it is the most beautiful beach in the world. Naturally, it is a huge tourist attraction, but there are many secluded spots nearby such as Gemiler beach, an unspoilt cove a few kilometres from Kayaköy.

For hikers there is the Lycian Walk, a 500km-trek between Fethiye and Antalya. We were determined to do at least a one-day hike. Blame it on the heat or the influence of Kayaköy, but we opted for another day on the beach instead.

We did, however, hike up the Saklikent Gorge, where the icy water from the Ak Mountain rushes down the canyon with a force that can blow you off your feet, throw you into a whirlpool and grind you against the rocks. With all these possibilities it is compulsory to engage a guide who takes you by the hand and ensures the waters do not carry you away.

After the events of the day, we could escape to Kayaköy. Although it is a tiny village, there were many bars and restaurants, typical Turkish establishments where you take off your shoes, sit on cushions and eat at a low table.

After supper we would walk back and once more lie down in the hammock. And as the adhan rang out from the mosques in the Kaya Valley and night time settled over Kayaköy we realised that our travels had brought us to a place far away. — © Loraine Maritz

GETTING THERE: Turkish Airlines (www.turkishairlines.com, e-mail jnbreservations@thy.com) flies direct between Johannesburg and Istanbul, from where you would need to take a connecting flight to Dalaman International Airport, the nearest airport to Kayaköy. Return fares from Johannesburg to Dalaman for travel in late October 2012 start at 728 euros.

WHERE TO STAY: Rates for 2013 at the Misafir Evi Hotel (e-mail info@kayamisafirevi.com, www.kayamisafirevi.com) start at 20 euros per person per night, including breakfast in the low season, rising to 30 euros per night during the July-September high season. The hotel is close to Gemiler beach (8km) and Ölüdeniz (10km).