The perks of going on a cruise on your own 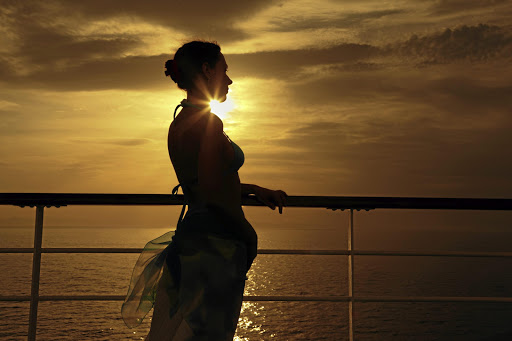 Cruising is a great way to find new friendship or love.
Image: Supplied

If you’re single or just wanting to holiday on your own, cruising is a great way to meet people — and even find romance, writes Sharon Waugh

A professional stuntman, a war veteran, a single mom who did roller derby, a doctor and a nomad whose only address was his camper van. No, these were not the cast members of the Amazing Race. Those people travel in pairs and I was in a room full of individuals.

We were on a ship called the Norwegian Getaway and this was the first Solos' Social of the cruise. Different people from a variety of nations, ages and walks of life, strangers to each other, were meeting for the first time as they ventured off on a seven-day Caribbean cruise together, alone.

Everyone had their own reasons for being there. An attractive woman had come to the social in the hopes of finding romance. An older man had just been widowed and, without his usual travel companion, had come in search of friends to make the cruise a little less lonely. Another woman was happily married and just needed a break from her family.

The host explained that, apart from the social every evening, there were also lunches, dinners and other activities scheduled throughout the cruise especially for the group. After everyone had introduced themselves and after some socialising, certain people started to gravitate towards others, smaller friendship groups started to form, and by the time everyone was ready to go to dinner, no one had to eat alone.

Meeting places were set up for those who wanted to attend shows and parties together later that night. A mutual sense of relief that the idea to cruise solo, though daunting, hadn't been a bad one filled the room and a sense of excitement set in.

Cruises have long been associated with romance and family time and marketed as such, but as more and more people are venturing off on their own, the cruise lines have noticed and are quickly adapting to reach this emerging market. If in the past, going on holiday by yourself was something to be pitied, these days it's becoming the norm.

For those who wish to travel solo, cruising may well be the safest and most convenient way to do this. Considering that ships move between international borders, the security is of a very high standard. Once you're on board, you can journey into a number of countries from your floating hotel.

Instead of venturing off on your own, you can go on ship-organised shore excursions that will enable you to see the sights and return safely with a group. All your meals and entertainment are covered and the likelihood of unexpected hiccups that could ruin your trip are minimal. Usually, the most daunting part is making it from the airport to the ship.

block_quotes_start Some cruise lines, such as Holland America, will try to match you with someone if you give them enough warning block_quotes_end

One of the biggest obstacles solo travellers face is the cost. Cruises are usually charged at cost per person with a minimum of two people sharing. For this reason, people cruising alone are generally have to pay a single supplement to cover some of the revenue that the company is losing by only having one person in a stateroom intended for two.

Fortunately, this is something that is changing. While some companies are waiving the single supplement or greatly reducing it, others are creating cabins solely for the solo cruiser.

Whether you are looking for a little romance, new friends or even some solitude, the range of cruises and entertainment available has become quite diverse. Here's a guide to some of the different types of solo cruises on offer:

The best way to find a little romance is through a singles cruise. There are a number of travel agencies who book large groups of single people of similar ages and interests on various cruises. They also provide their own host who oversees a number of private events, which are all arranged to help guests find new friends and perhaps something more.

Travel agencies that do this include Vacations To Go, Best Single Travel, SinglesCruise.com and Singles at Sea. They tend to be dominated by North Americans, so if geographical differences hinder your efforts to find love, at the very least you will have a good time and leave with some new Facebook friends.

In order to attract the solo cruiser, many cruise lines offer discounted "single supplements" or waive it on certain sailings, for example Carnival, MSC and Uniworld River Cruises. It's also not uncommon for them to offer last-minute discounts as they would rather have one person in a double-occupancy cabin than no one. As they are less solo-focused, they may provide little in the way of socials for solo travellers and your ability to meet others may be limited to dining.

If you ask, the maître d' will usually accommodate you at a large dinner table with other single passengers if there are any. You can also make friends with other guests prior to the cruise online through sites such as Cruise Critic and CruiseMates.

Another way to avoid paying a single supplement is to get a roommate. Some cruise lines, such as Holland America, will try to match you with someone if you give them enough warning. They generally tend to pair people of the same gender and similar age.

There are also a number of websites such as CruiseMates, TripTogether and SouthAfrica.TO where you can find your own roommate online prior to booking. In both cases, it is not uncommon for roommates to become good friends and book future cruises together.

• Studio cabins and side programmes

Norwegian Cruise Lines was among the first to implement single-occupancy "studio staterooms". They can be found on all of their mega ships (the Epic, the Breakaway, the Getaway and the Escape). The cabins are in a key-card controlled area of the ship, which allows guests access to their own studio lounge, where they can mingle with other solo cruisers and enjoy complementary cappuccinos or even drinks at the bar.

A number of other cruise lines have also added solo cabins to new or existing ships, including Cunard, P&O Cruises, Fred Olsen and Costa Cruises. Royal Caribbean has even introduced solo balcony cabins on two of their ships (The Quantum of the Seas and The Anthem of the Seas).

On ships such as these, you're more likely to find more solo travellers and more extensive programmes of specialised activities. The extent of these can differ between different ships within a cruise line (when in doubt, check with the travel agent or read online reviews).

For those who genuinely just want solitude, there is no pressure to participate in the activities but the benefit of being on a ship like this is that cruising solo has become so normal that any sense of awkwardness is eliminated.