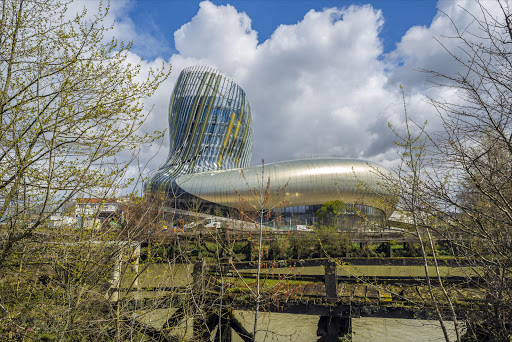 Bordeaux's City of Wine is housed in a fantastic building on the bank of the Garonne river.
Image: iStock

Lonely Planet has released its list of the best cities to visit in 2017, and Cape Town is right up there, along with some fairly obscure destinations.

We take a look at why these destinations made the top 10 and why they're worth adding to your bucket list.

Why it made the Lonely Planet's top 10: Bordeaux is the hub of the wine-growing region of South West France, so it’s fitting that it’s now home to la Cité du Vin (the City of Wine). This new tourist attraction (pictured above) promises to bring wine to life with interactive museum exhibits and other vino-related activities.

As the Lonely Planet points out, the new LGV Sud-Ouest railway line, which is due to open in mid-2017, will also make visiting Bordeaux a breeze. It'll connect the city to Europe’s fabulous high-speed train network and make it a mere two hour trip from Paris.

What else makes it worth visiting: Bordeaux has more preserved historical buildings than any other city in France, apart from Paris, most of them from the 18th century. The city also has a vibrant and modern food culture, as well as many top-class art galleries.

Why it made the Lonely Planet's top 10: Cape Town’s food scene is now world-class and it offers a host of natural attractions and nearby wineries.

Next September its many cultural attractions will include the Zeitz Museum of Contemporary Art Africa (MOCAA). Housed in an excitingly converted century-old grain silo close to the Waterfront (pictured below), it'll be the world’s largest museum of contemporary African art.

Why else it’s worth visiting: It's just a short plane or road trip away.

Why it made the Lonely Planet's top 10: According to Lonely Planet, it's become so much easier to explore the City of Angels thanks to the 2016 Metro expansion as well as a city initiative, Car Free LA, which helps tourists get around without private cars. With 50 new hotels on the horizon, finding accommodation should also be a doddle.

Why else it’s worth visiting: There's a lot more to LA than Hollywood and its historic film studios. From the Getty Center to the Los Angeles County Museum of Art, there's a host of attractions to keep culture buffs entertained.

Why it made the Lonely Planet's top 10: Merida on the Yucata'n Peninsula of Mexico is one of the country’s smaller cities, but also one of the safest to visit. It's been designated the American Capital of Culture for 2017, so you can expect an exciting array of large-scale events to be taking place throughout next year.

Why else it's worth visiting: The White City, as it is known, has many attractions. More than half the people are of Mayan descent and the ancient culture is everywhere, even in the food. It also has a rich colonial heritage.

Why it made the Lonely Planet's top 10: Best seen from the lake of the same name, Ohrid is a mass of red-tiled roofs dominated by Samoil’s Fortress. It once boasted 365 churches and was known as the Jerusalem of the Balkans, but today it’s brilliant beaches make it Macedonia’s top holiday destination.

Why else it's worth visiting: Many regard the Balkans as the unspoiled treasure of Europe, a relic of how it used to be before mass tourism. Ohrid and Lake Ohrid are now UNESCO Cultural and Natural World Heritage Sites, one of only 28 that are in both categories.

Why it made the Lonely Planet's top 10: Known as ‘little Florence’ for its wealth of art and architecture, Pistoia has been crowned Italy’s Capital of Culture for 2017.

Why else it's worth visiting: This fortified medieval town is just 30km away from Tuscany’s crowded capital, Florence. It claims to be the first place where pistols were manufactured and it is now famous for its flower markets and many nurseries. It’s a lovely example of thriving smaller Italian towns which all have their own character and a dynamic living culture far removed from tourist clichés.

Why it made the Lonely Planet's top 10: The South Korean capital has never been an obvious tourist destination, but for the last decade it's been cleaning up its concrete jungle image with projects like the Cheonggyecheon. This is an 11km-long recreation space downtown, along a stream that was long covered-over for public transport. It opened in 2005 at a cost of about R12-billion ($900-million) and fast became popular.

Now a new section, the Seoul Skygarden, will open next year. It's an old elevated highway, or 938m of it, next to Seoul railway station, and will be planted up with 254 types of trees, shrubs and flowers from across South Korea. It's being touted as a rival to New York’s High Line park, also situated on an unused  elevated transport route, and will feature performance spaces, cafes, a library of plants, flower shops, street markets and greenhouses.

Why else it's worth visiting: Seoul has become an great example of the "smart city" movement, aiming to merge technology with urban development. It's full of inspiring and creative urban projects.

Why it made the Lonely Planet's top 10: Lisbon boasts wonderful cuisine and a wealth of museums with yet another one, devoted to the history of Judaism in Portugal, scheduled to open in 2017.

Why else it's worth visiting: Thanks to our Portuguese community, South Africans are perhaps more aware of Lisbon than many tourists who flock to Barcelona, Madrid and other Iberian cities. This is a good thing because, as the Lonely Planet points out, this capital city tends to be a bit more affordable than other popular European destinations, which is always handy for those travelling with Rands.

Why it made the Lonely Planet's top 10: Soccer fans are sure to be flocking to Moscow for the 2017 Confederations Cup and the 2018 FIFA World Cup. Next year also marks the centenary of the Russian revolution and it's certain to feature in the city’s events calender.

The new Ramenskoye Airport and a new metro line will improve the experience of visiting the city. There's also a new attraction, the Polytechnic Museum and Educational Centre, coming soon.

Why else it's worth visiting: The city’s food has undergone something of a revolution from its grim Soviet days. There are plenty of attractions to choose from including the Kremlin, Bolshoi Theatre and many museums.

Moscow also made Tripadvisor's list of the cheapest cities to visit for a summer break, always a bonus for when you're traveling with Rands.

Why it made the Lonely Planet's top 10: Portland, Lonely Planet says, doesn’t try to impress anyone and so impresses everyone. “It’s America’s city of the future: a friendly, sustainable, ethical place that values good living and leisure over acquisitiveness and ambition”.

Why else it's worth visiting: Once regarded as a dangerous port city, Portland has long been transformed into a city people love living in and visiting. It has many public parks and gardens and is surrounded by mountains. "Keep Portland Weird" is an unofficial slogan for the "city of roses’, which makes it pretty irresistible.