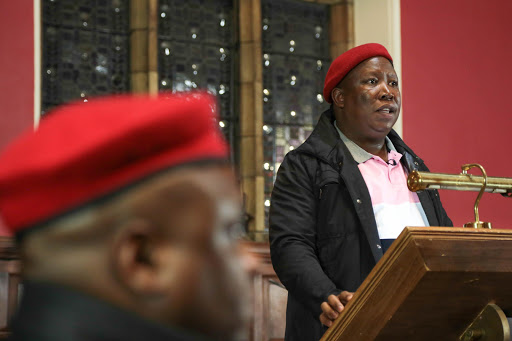 The two were supposed to have a private meeting at Corbyn’s constituency office, in the very humble Durham Road Resource Centre in Islington, on Friday, but it was not to be.

Corbyn is fighting a rebellion in his party — right-leaning Labour MPs have openly called on him to step down amid reports of a coup in the making. Corbyn is also trying to appeal to grassroots Labour supporters to write to their MPs and ask them to vote against Prime Minister David Cameron’s plan to go to war in Syria.

British MPs will soon vote on Cameron’s plan to bomb Islamic State targets in that country.

With all that going, small wonder there was a bit of mix-up as to whether Malema’s group, including Dali Mpofu, Floyd Shivambu and spokesman Mbuyiseni Ndlozi, were expected.

“I don’t know who you are,” said a mature lady in Corbyn’s office. She scuttled off to find out.

Then came back to say “we’d been told to expect you at 3pm, then we were told it was not happening any longer”.

In a sense, Malema was a victim of his own success. He proved a popular man during his address at Chatham House earlier in the day and was delayed by the volume of questions from the audience before making his escape to fight gridlocked central London traffic to get to Islington.

But by then Corbyn could be glimpsed hunching over a speaker phone, focused on a geo-political crisis that has significant repercussions domestically.

So it was left to one of Corbyn’s young aide’s to deliver the bad news to Malema’s group.

“Unfortunately, given Cameron’s statement yesterday [Thursday] Jeremy’s had to deal with the Syria issue. He’s going to be on an international conference call that will last very long,” said the somewhat shaky-voiced young man.

Malema, who was hanging back, simply turned and went back to his minivan with Mpofu while Corbyn’s staff tried to untangle the mess.

Corbyn had cleared his diary, foregoing campaigning in various by-elections, to deal with the crises in Syria and Labour.

He faces a humiliating revolt by Labour MPs, who favour dropping British bombs on Syrian soil. Polls show the British public is split on whether to get involved in Syria or not.

Stacked along the wall in the reception area of Corbyn’s office on Friday evening were hundreds of placards saying simply: “Don’t bomb Syria.”

The placards were made by the Stop the War Coalition, also one of the tenants at the Durham Resource Centre, which organised a march on Downing Street on Saturday. Thousands of people joined the protest, many holding aloft the same placards stored outside Corbyn’s office.

Corbyn stood down as Stop the War Coalition chairman in September, after his election as Labour leader