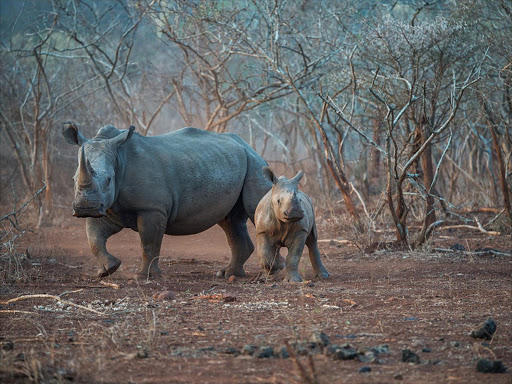 "On an afternoon game drive in Zimanga Private Game reserve, KwaZulu-Natal, we came across this white rhino and her calf running away in the last light of day. It was interesting to see how the mother was never far from the young calf," observes the photographer.

“For the first time in a decade the poaching numbers have stabilised in South Africa‚” she told a news briefing.

The minister said intervention programmes were ongoing. These included training of 147 border enforcement officials‚ and new technologies introduced to fight rhino poaching. Nearly 400 magistrates underwent intensive training last year to get a deeper understanding of the effects of rhino poaching‚ she added.

During 2015‚ 124 rhino were translocated from the Kruger park to protect them from poachers. “These translocations to protected areas will continue in March 2016‚” Molewa said.

A total of 317 arrests related to rhino poaching at the Kruger National Park were made last year‚ and a total of 188 firearms were seized at the park in the year.