Businessman Fana Hlongwane, who was at the centre of the arms deal scandal, has been identified as the "fixer" who took Deputy Finance Minister Mcebisi Jonas to meet the Guptas last year. 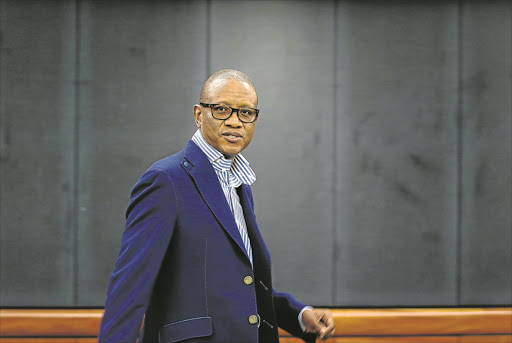 A number of insiders with intimate knowledge of the meeting revealed that it was Hlongwane who arranged the meeting at a Sandton hotel where Jonas was offered the finance minister post while Nhlanhla Nene was still in office.

Details of Hlongwane's involvement come as the ANC is conducting an investigation into claims that the Guptas had offered its leaders government posts and tried to influence others to direct government business to family firms.

When the Sunday Times called Hlongwane on his cellphone on Friday, the person who answered denied that the number belonged to him.

"Maybe if you can try calling again you might get through to him [Hlongwane] but I have answered you, this is not him," said the person on the phone. The Sunday Times has established that the number is registered under Hlongwane's name. He also didn't respond to an e-mail sent to his company's e-mail address.

Jonas laughed when approached for comment on the sidelines of a press briefing by the South African Revenue Service on Friday. "Who told you that? I can't talk about it."

The Guptas, who have repeatedly denied that the meeting took place, refused to comment on these allegations, and accused the newspaper of having a political agenda.

"Unfortunately, the Sunday Times has consistently failed to report stories regarding the Gupta family and its businesses in anything even vaguely resembling a balanced manner. As such, we see no point in responding to further spurious allegations, given they are prompted by a clearly politically driven agenda," they said in a statement.

At the meeting, the Guptas allegedly told Jonas that they would like him to replace Nene as finance minister. He was given a list of people to get rid of at the National Treasury, including director-general Fuzile Lungisa and top officials Ismail Momoniat, Andrew Donaldson and Kenneth Brown.

The four, who have been with the Treasury for more than 22 years, are fierce critics of the nuclear procurement programme, which they believe would bankrupt South Africa.

Firing them, sources said, would have allowed the family to "capture" the Treasury, as the four vacancies would have been filled by bureaucrats approved by the Guptas.

Nene was fired by Zuma on December 9, and replaced by ANC MP David van Rooyen. The appointment lasted only four days as the decision sent markets tumbling.

The nuclear procurement programme was approved by the cabinet on December 9 - clearing the way for nuclear vendors to present proposals.

Under Nene, the Treasury had opposed the construction of a proposed six to eight nuclear power stations, saying the project was unaffordable. Experts estimate it could cost as much as R1-trillion.

The Guptas are said to be positioning themselves to benefit from the project through their company Shiva Uranium.