The Church of the Flying Spaghetti Monster held the world's first legally recognised marriage in New Zealand on Saturday, with the offbeat movement hailing it as a milestone toward acceptance as a real religion. 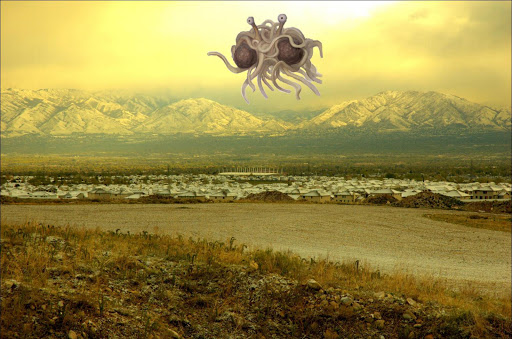 Church adherents call themselves pastafarians, wear colanders on their heads, revere pirates and believe the world was created by a giant deity made of spaghetti.

But while they have a love of pasta-based puns and celebrate holidays such as "Talk Like a Pirate Day", followers insist their religion is no joke.

Martyn conducted her inaugural wedding as an ordained "ministeroni" on Saturday, when Toby Ricketts and Marianna Young became the first couple in the world to "tie the noodly knot" in a legally recognised ceremony.

"It's a formal recognition that we are a church and that's just great," she told AFP ahead of the ceremony.

She said many more weddings were planned, including same-sex unions, which were legalised in New Zealand in 2013.

"I've had people from Russia, from Germany, from Denmark, from all over contacting me and wanting me to marry them in the church because of our non-discriminatory philosophy.

"We will marry any consenting legal adults who meet the legal requirement."

The wedding took place on a charter vessel decorated as a pirate ship at the South Island town of Akaroa, with guests dressed in costume.

Ricketts, a filmmaker who discovered pastafarianism while making a documentary about religion, said he knew some people may not take the marriage seriously.

"That's kind of what attracted us to it," he told AFP. "We were never planning to get married and have a conventional wedding but this allowed us to do it in a way that we're comfortable... our families are 100 percent behind us."

Pastafarianism first appeared in a 2005 open letter written by Bobby Henderson to the Kansas Board of Education in protest over its decision to teach intelligent design in schools.

Henderson, 36, a self-described "hammock enthusiast" and computer nerd from Oregon, is regarded as the prophet of the Church of the Flying Spaghetti Monster (FSM).

He argued that believing a pasta god made the universe was as no less valid than intelligent design, a form of creationism promoted by Christian fundamentalists, as both theories had no scientific merit.

Since then it has gained popularity and Henderson's website venganza.org details member activities ranging from public parades to campaigns for the right to wear colanders on driving licence photographs.

"New Zealand is one of the few places that has formally recognised us," he told AFP via email.

Not all are happy with the decision, including professor Peter Lineham, a religious history specialist at New Zealand's Massey University.

"I am not at all convinced there's a genuine statement of values (in the church)," he told Fairfax New Zealand when the original decision was handed down.

"I know some people who think The Force is rather more meaningful than a spaghetti monster," he added, saying FSM was essentially a satirical body that mocked religion.

"We are anti-discrimination on any basis for any reason and we truly believe there should be a complete separation of church and state," she said.

"We believe in challenging ourselves and other religions and challenging cultural superstitions... we're very serious about our beliefs."

She said there was a major distinction between a joke church and a church that can take a joke and laugh at itself, such as the FSM.

"Laughter is the best medicine and it makes life much better and maximises our happiness," she said. "We embrace that to the fullest extent."