SABC staffers are living in fear of their lives amid a wave of threats, intimidation and harassment. 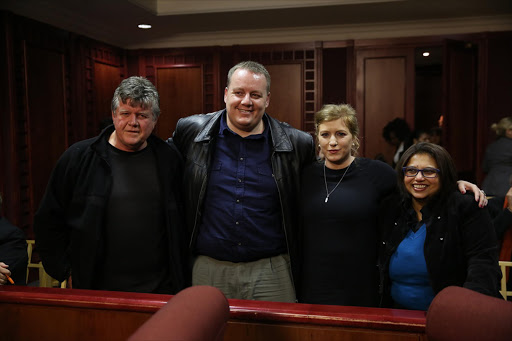 Journalists Foeta Krige and Suna Venter were told this week to skip town after receiving a threatening text message on Wednesday after a sinister break-in at Venter's house.

This is the latest in a string of threats to persuade them to drop a Constitutional Court case against the public broadcaster.

The case comes as details have emerged of threats received by staff at the SABC's offices in Polokwane.

The Polokwane staff have been accused of trying to sabotage the move of radio station PhalaphalaFM to Thohoyandou and carrying "negative stories" about Venda King Toni Mphephu Ramabulana.

Mphephu Ramabulana hit the headlines this week when it emerged the Venda Building Society Mutual Bank, in which he controls a large stake, loaned President Jacob Zuma R7.8-million to pay for nonsecurity upgrades at Nkandla.

Krige and Venter are among the "SABC 8" who applied to the court on Monday to have the broadcaster's policy of refusing to air protest footage declared unconstitutional.

They have reported receiving a string of threatening SMSes in the last three weeks.

They wrote a letter to SABC management this week, asking for an urgent investigation.

They said the threats started two days after a parliamentary portfolio committee meeting with the broadcaster's executives last month at which they were labelled "liars" and "traitors".

"Several of the messages contain or refer to facts that were contained in highly confidential correspondence," said the letter, which was sent to acting CEO James Aguma.

"It is thus clear our communications are being intercepted and the content leaked in order to perpetrate the act of intimidation," they wrote.

It is suspected that the break-in at Venter's Johannesburg home may be linked to the threats. Police confirmed that one investigating officer was handling both cases.

Venter's house was broken into early on Monday shortly before papers were filed at the Constitutional Court. Nothing was stolen.

Two days later, Venter and Krige received an SMS that read: "OK YOV WERE WARNED (sic)." They were advised to leave Johannesburg immediately for their safety.

All except Mvoko were reinstated after the Labour Court set aside their dismissal on July 26.

Steenkamp quit on Monday but on Wednesday was told to leave without serving his notice.

"It's obviously linked to the supplementary affidavit that we filed in the Constitutional Court this week," he said.

The SABC 8 say that although the broadcaster accepts that its protest policy is unlawful, the SABC and Communications Minister Faith Muthambi continue to defend it.

They want the court to declare parliament in breach of the constitution by not holding the SABC accountable and to instruct the National Assembly to institute an inquiry into a litany of complaints.

These include surveillance, "constant harassment", editorial interference and censorship of news items critical of Zuma, the SABC and Mphephu Ramabulana.

The issue of Mphephu Ramabulana's disputed kingship is the source of smouldering tensions at the SABC's Limpopo office, with journalists complaining of receiving threats about its coverage.

The Sunday Times has seen a letter written by a senior SABC staffer dated August 24 sent to his managers that tells of "receiving calls left right and centre, some not so polite, from some authorities that we were carrying negative stories about the coronation. We are so rattled that it is becoming a challenge to calm everyone down."

The letter also related how a union member at an SABC labour meeting in Polokwane had read out a list of people who objected to plans to relocate parts of PhalaphalaFM to Thohoyandou. They were branded "saboteurs" who were going to be "dealt with".

"The matter is sub judice and, as such, the SABC will not engage in any media discussions around it."

He did not respond to questions about threats to SABC staff.