WATCH: The real man caves of Clifton - 'When the ocean is angry ... it takes my belongings' 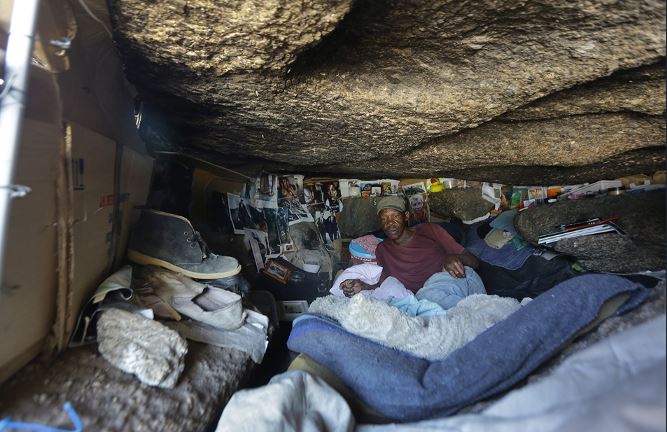 Every day Dan 'The Caveman' Mokopiane lights a fire in front of his home overlooking one of South Africa’s most dazzling panoramas — a view some pay tens of millions of rands for.

On the horizon the sun sets over the Atlantic Ocean. To his left the Blue Flag beaches of Clifton and Camps Bay are stitched between the sea and some of the most opulent homes in the southern hemisphere.

Less than 20m separates Mokopiane from Nettleton Road in Clifton, Cape Town, where a 2016 report from property analysts Lightstone said the average price for a home was R47.5-million —  the highest in the country.

But Mokopiane, 28, and his five neighbours live there for free. They are the cave-dwellers of Clifton, homeless men who live in hollows in the stone and spaces between boulders on an almost sheer slope.

Every day they battle either nature, the elements, criminals or law enforcement to sustain their tiny mountainside shelters.

For Mokopiane, who is originally from Butterworth in the Eastern Cape and who enjoys the ocean breeze and watching  whales swim by, living in a cave is not an aspiration.

“I didn’t leave the Eastern Cape because I wanted to live like this,” he said. “I came to try and find work and to be closer to my family.

“What I do now is skarrel [hustle] and find stuff to sell. People throw away so much useful stuff. You can find gold or even money in the dustbins here.”

Mokopiane wants to be a carpenter, but for now he and the other cave-dwellers make a living taking what they can find in rubbish bins and depending on the generosity of others. They live relatively peacefully alongside each other and share what they have.

But they do face potentially fatal danger every day from the rugged terrain. Just clambering down the rock face to bathe in an ice-cold pool formed by scattered boulders where the mountain meets the ocean could be deadly.

But facing the violence of nature is still a better option than living on the street “with criminals”. So said Richard Skepe, 43, who occupies a crack in the rock about 5m below Mokopiane’s cave.

Skepe has been there since 2003 and he has turned his home into a “man cave” furnished with a bed, miniature figurines, pictures torn from magazines and a battery-operated radio.

“I like the ocean but I am afraid of it, because when it is angry it comes closer and takes my belongings,” Skepe said.

“But people are still more dangerous than the ocean so I would rather stay here.”

Both men are nervous about the possibility of city officials removing them and their belongings, which they say happens at least twice a year.

According to Skepe, they are usually evicted in December and before Easter. “The law enforcement are coming any day now. They come with a truck and bags and take all our stuff and then we have to start all over again,” he said. “They tell us this place is only for nature.”

Camps Bay Community Police Forum chairman Bernard Schafer said the city council had made several attempts to remove the cave-dwellers “for their own safety”.

“It is an extremely hazardous environment,” said Schafer. “It is not designed in any way for human habitation [and] we have had various occupants fall to their death.

“But it’s not easy for authorities to get that message through to the occupants even if those spaces are dangerous for them. We welcome any efforts that are made to find those people safe accommodation.”

Mokopiane said that if someone offered “work and a place to live” he would go immediately, “I wouldn’t look into their eyes and say ‘let me think [about it]’,” he said.

Lightstone analytics director Paul-Roux de Kock said the high average value was reasonable “considering that the majority of properties in this secluded street are large multiple-storey homes with panoramic views of the Atlantic Ocean”.