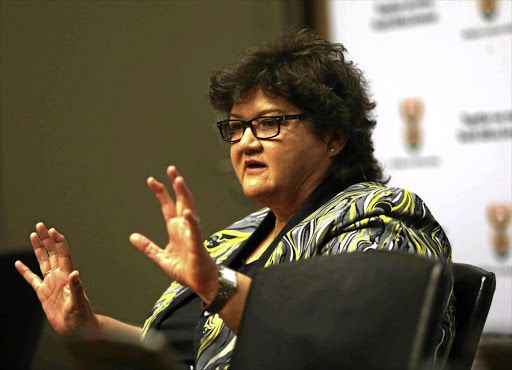 The Minister of Public Enterprises, Lynne Brown, briefing the media at parliament on Eskom following the announcement that Brian Molefe would be returning as its CEO.
Image: ESA ALEXANDER/SUNDAY TIMES

Brown will appear before the party's top leaders tomorrow — at the same time that Molefe is expected to report for duty at Megawatt Park.

Party spokesman Zizi Kodwa said the ANC leaders would instruct Brown to reverse Molefe's appointment or dissolve the board, which is chaired by Ben Ngubane.

Kodwa said the ANC was disappointed with Brown for endorsing a "clearly immoral and illegal" decision of the Eskom board.

"We want to express our disappointment with the shareholder minister. We're embarrassed as the ANC that she could embrace what appears to be illegal and immoral.

"The only moral thing we were expecting and we're still expecting, is to rescind and reverse that decision or dismiss the Eskom board because with this decision, they have failed to [carry out] their fiduciary responsibilities."

The ANC is also angry that Molefe resigned as an MP without informing chief whip Jackson Mthembu or secretary-general Gwede Mantashe.

"We need to be very careful about decisions that might undermine the confidence our people have in us," he said.

"We need to sit with the minister and get clarity about what led to this because we are very uncomfortable.

"I wasn't aware of [Molefe's move back to Eskom] before it was announced and it was not discussed in any of the structures that I sit in."

Molefe joined parliament as an MP after resigning from Eskom after former public protector Thuli Madonsela raised concerns about his possible conflict of interest involving the Gupta family.

His move to parliament was seen as preparation for him to become finance minister.

The Sunday Times last month reported that the Eskom board had approved a R30-million pay-out to Molefe and a further R7-million "for his early retirement".

Shortly after this Brown said she had declined Molefe's R30-million pension payout and asked the board to explain it.

But on Friday, Brown changed her tune as she came out in support of the board's decision to reinstate Molefe.

Brown said she believes that "Eskom will benefit from the return to the helm" of Molefe.

"The board's proposal ultimately represents a significantly better value proposition to the South African fiscus than the previous pension proposal," she said.

Yesterday the Eskom board refused to disclose exactly when the board resolved to reinstate Molefe.

Board spokesman Khulani Qoma said: "The board can't divulge either the date it made the decision or when it approached Molefe." The Sunday Times contacted four board members, who also refused to discuss the matter.

Qoma said Molefe agreed to repay the R7-million he was paid in January before November this year.

"Brian didn't resign, he applied and was granted an early retirement. The board's decision to grant it was legitimate and proper," said Qoma.

He added that Molefe "didn't jump in jubilation when the board approached him with an offer" but there were serious negotiations.

He said the Eskom Pension Fund paid the R30-million into Molefe's pension account and not his personal bank account.

Qoma denied that Eskom had interviewed a number of people for the position of CEO, which had been advertised.

"The search process to identify a suitable candidate for the position of group chief executive has not evolved to any interviews of identified candidates. Due to this, there can be no reasonable expectation of placement."

But the Sunday Times confirmed that Woodburn Mann, a placement agency that was appointed by Eskom to recruit a suitable candidate for its group CEO, had interviewed seven people for the job, including former acting CEO Matshela Koko, who was this week put on leave pending an investigation into how a company his step-daughter was a director and shareholder of was awarded contracts worth more than R1-billion.

Anoj Singh, the company's chief financial officer, was also interviewed for the CEO position. He declined to talk to the Sunday Times yesterday.