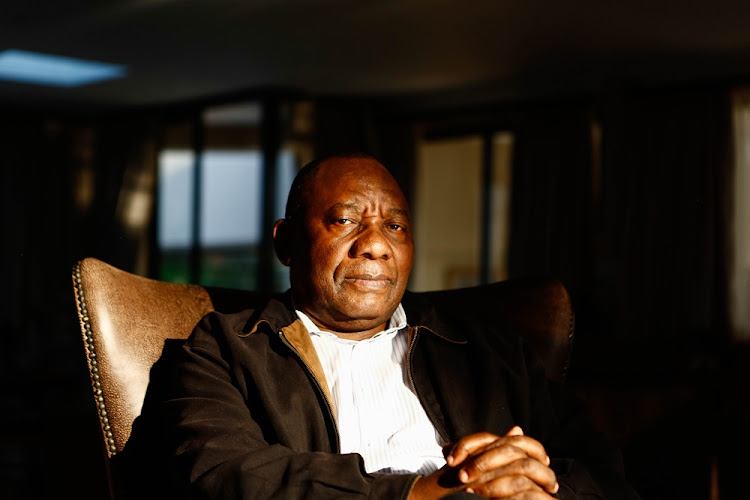 Deputy President Ramaphosa questions whether his private affairs were in the public interest.
Image: Moeletsi Mabe

Deputy President Cyril Ramaphosa has made a dramatic confession about an extramarital affair, as he moves to clear his name amid signs of a dirty tricks campaign to derail his bid for the ANC presidency.

In an exclusive interview with the Sunday Times yesterday, Ramaphosa said the affair, with a Limpopo doctor had ended eight years ago.

"I had a relationship with only one person and it ended. I dealt with it with my wife. We now have a professional relationship."

The doctor was not available for comment late yesterday.

The combination of Cyril Ramaphosa as ANC president and Human Settlements Minister Lindiwe Sisulu as his deputy has emerged as the most popular ...
News
4 years ago

Ramaphosa said some of the other seven women named as his "girlfriends" in a document circulated on social media this week were in fact students he and his wife, Tshepo Motsepe, were assisting financially.

"I am not a blesser. My wife and I support 54 young people every month - 30 females and 24 males. We are transforming people's lives."

Motsepe, who is a sister to South African billionaire Patrice Motsepe, yesterday stood by her husband, saying she was hurt at what was clearly a smear campaign.

"It is very sad what is happening. It's disappointing that people have to go to such lengths to discredit a person. I am very, very upset about it. We have been together for a very long time and are happily married. I support and respect him and I love him."

She confirmed that some of the women named were receiving financial support from her and her husband. The oldest is a 44-year-old male cardiologist.

Late last night, Ramaphosa failed to interdict the Sunday Independent from publishing a story about his alleged extramarital affairs.

The deputy president told Sunday Times he believed state resources were being used to orchestrate a political smear campaign to stop him from contesting the ANC leadership in December.

"I have to be prevented at all costs from ascending to the position of president of the ANC. Some have even said it will happen over their dead bodies. I have not committed any crimes, I have not stolen any money, I have not looted state resources.

This isn't going to deter me ... as long as I have support from ANC branches I will carry on. I am tough enough

Ramaphosa was trending on social media on Friday after questions sent to him by the Sunday Independent were leaked.

In the questions, purporting to be from Sunday Independent editor Steven Motale and seen by the Sunday Times, Ramaphosa is asked to confirm his private e-mail addresses, and to confirm if he has had "romantic and sexual relationships with the women listed below, as suggested by the e-mails in our possession". It also asks him to respond to "suggestions" in the e-mails that he had unprotected sex and that one of the women fell pregnant and miscarried.

Ramaphosa questioned whether his private affairs were in the public interest.

"For me that is the question. Has a crime been committed? No crime has been committed. It is private communication and really there is no interest about it."

He would ask the inspector-general of intelligence to investigate the hacking of his e-mails to try to get those involved to face the music. "I have no doubt they would have doctored some of the e-mails."

Ramaphosa said he had beenwarned "a few months ago" about the campaign, by officials who refused to be part of it.

"I was told they are building a file on me, that [the campaign] would even go on to be violent. They are going to get desperate.

"This isn't going to deter me ... as long as I have support from ANC branches I will carry on. I am tough enough."

Presidential hopeful Cyril Ramaphosa has denied allegations - contained in leaked questions purportedly sent to the deputy president by the Sunday ...
Politics
4 years ago

A source close to Ramaphosa said last week they had been briefed by intelligence officials about the dirty tricks campaign.

He said they had been told that high-placed state security members had been compiling a dossier on Ramaphosa since 2013. The campaign also included "laughable" claims that his South African citizenship was fraudulent and that he had links to unscrupulous Americans.

Nonhlahla Radebe, one of the women alleged to be having an affair with Ramaphosa, yesterday said it was "a total fabrication".

"I never met Cyril. He doesn't even have my e-mail address. Now my photo, taken from my Facebook account, is in some post alleging that I am his girlfriend.

"I live in Berlin, Germany, where I am doing my PhD. I came to South Africa in April to collect some data, [but] I have never met Cyril," a tearful Radebe said.

ANC secretary-general Gwede Mantashe said the scandal was reminiscent of the dirty tricks used in the dark days of apartheid.

He said he hoped the ANC would not stoop to that level, just three months before its national conference where Ramaphosa will be standing for the party presidency.

He said he could not say whether state institutions were being abused to tarnish the deputy president's image.

"I'm saying I hope this is not a smear campaign. We must have facts first."

Solly Mapaila, the first general secretary of the SACP, which is part of a lobby group campaigning for Ramaphosa, dismissed the sex scandal as a smear campaign. "We still respect his integrity as an ethical man. We don't think this campaign will hold water."

Cosatu general secretary Bheki Ntshalintshali said Ramaphosa remained their preferred candidate. He said Ramaphosa's opponents would stop at nothing to tarnish his image. "To me it's obvious. The president of the women's league [Bathabile Dlamini] stood up on a platform and said there are people worse than Manana [former higher education minister Mduduzi Manana], and what then follows is an allegation that Cyril was abusive to his former spouse. The fingers are pointing in one direction - that those who oppose him will stop at nothing."

Senior ANC national executive committee member Enoch Godongwana said the leaking of Ramaphosa's e-mails resembled the conduct of apartheid operatives. "We never thought even within our ranks people can sink so low."

EFF leader Julius Malema said two weeks ago that he was aware of a campaign targeting Ramaphosa. One of the allegations was that Ramaphosa beat women. But his ex-wife, Hope Ramaphosa, defended him on a local radio station.

"Cyril would rather negotiate or do things amicably than beat someone up. He is very sensitive to women's issues," she said.

On Friday night, Malema tweeted: "Ramaphosa, his wife & supporters will have to be extremely strong especially as they move closer to the conference, dirty tricks on steroids."

Almost everyone in the ANC now knows that President Jacob Zuma is a liability to the party and has proved to be a wrecking ball to its support base‚ ...
Opinion & Analysis
4 years ago