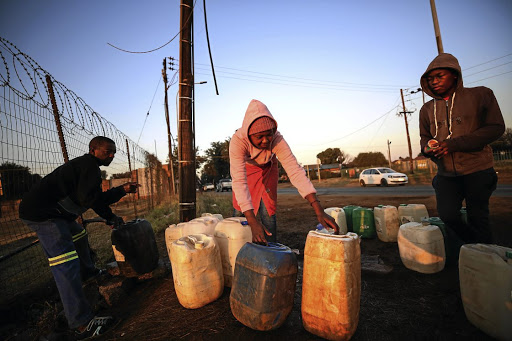 Men and women collect water in the early hours of the morning in Koster after the water was cut - in retaliation for service delivery protests, say some.
Image: Alaister Russell

Welcome to Koster. Potholed, steeped in sewage, overflowing with rubbish and with no water in the taps. A town on the brink of meltdown, brought on by years of chronic maladministration.

For years, residents have accused mayor Kim Medupe of "living large" while failing to provide basic services to the long-suffering townsfolk.

The final straw was last month when she prioritised the tarring of the road to her guesthouse over tarring the road to the local hospital.

The community exploded in anger, burning down her guesthouse and setting fire to five cars.

Medupe and 10 councillors fled for their lives, and are now holed up in "a safe place" in Rustenburg.

Days after the protest began, water supply to the town was cut. Residents claim it was in retaliation for their protest. The municipality says it was over concerns of possible contamination.

The town has now been without water for three weeks, causing pipes to block up and overflow. Now sewage flows through houses and down streets.

But the community is not going down without a fight.

On Tuesday, Koster magistrate Herman van Wyk granted an interim order to the local ratepayers' association, allowing it to take control of the municipality's water and refuse systems "for as long as necessary".

The landmark ruling puts control of key services in the hands of its citizens.

Koster, together with the neighbouring towns of Derby and Swartruggens, is part of the Kgetlengrivier municipality in North West, a province that is under administration.

Van Wyk said the municipality, which was revealed to be dysfunctional by the Department of Co-operative Governance and Traditional Affairs last month, had failed to provide basic services and contravened the constitution.

He ordered the municipality's technical staff to help the association supply water to residents. It is hoped the water will be restored once missing chemicals have been replaced.

The interdict is the second granted to residents within a month.

Last month the High Court in Pretoria ordered Eskom to halt its plans to cut the town's electricity because the municipality owes it R49-million.

Some residents have Eskom prepaid meters and others pay the municipality for what they use.

Michael Nombuya, 76, walks 20km a day to collect water from a school borehole.

He walks daily to Koster Combined High School from his home in Reagile township with four 20-litre buckets.

"If it was not for the borehole I don't know what we would do. I have no choice. My grandchildren are writing exams. They need to study and their parents work.

"The municipality is punishing us for asking for proper services and houses." 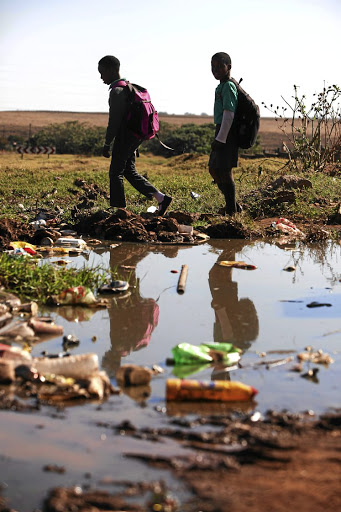 Schoolchildren make their way home along a stream of raw sewage and rubbish in Reagile, near Koster in North West.
Image: Alaister Russell

Kagiso Mere said the water cuts meant he had to take three hours off work every day to collect water.

"My boss understands, because he's also affected. The municipality has endangered our lives. There is s**t everywhere. They were meant to provide us with services, but instead they build themselves nice homes with tar roads to the mayor's guesthouse.

"All we wanted was a tarred road so the ambulances can reach us in emergencies."

General dealer Aboo Baker Haffejee said: "The sewage plant is not working because there is no water. Businesses, which require water to function, are in dire straits and close for days. Jobs are at risk."

Councillor Cobus Snyman said the news about the tarring of the road to the guesthouse had been the final straw.

"The community exploded. For years they have pleaded for basic services and jobs. When the community found out about the road, they saw red."

He said the water was cut on the last day of the protests, leading many to believe it was a reprisal.

But municipal manager Joseph Mogale rejected this, saying the municipality "would not stoop that low". He said the water had been stopped out of safety concerns after it was, he claimed, contaminated by residents.

Mogale said when the protests began on May 23, Medupe and 10 councillors fled Koster, where the municipality is based, to Rustenburg.

Contacted by the Sunday Times this week, Medupe confirmed she had fled, but would not say why or where she was. She asked for "space" and asked to be phoned back.

She failed to answer or return messages.

Councillor Emily Doyi, who is mediating between the community and municipality, said the situation in Koster was because of poor leadership.

"Koster is not alone. It's a time bomb which mirrors other rural towns."

Doyi said people wanted to know where and how Medupe earned her money.

"They suspect there is corruption. Residents say she had her road tarred so people would come stay at her guesthouse."

Snyman said while there had never been proof that Medupe was corrupt or received tender kickbacks, residents wanted answers on how she got her wealth.

"You can see how the municipality's leader is living large while the residents suffer. It's angered people and raised their suspicions."

Municipal IQ economist Karen Heese said the picture was bleak for municipalities, especially for those in Limpopo, the Northern Cape and North West.
News
3 years ago