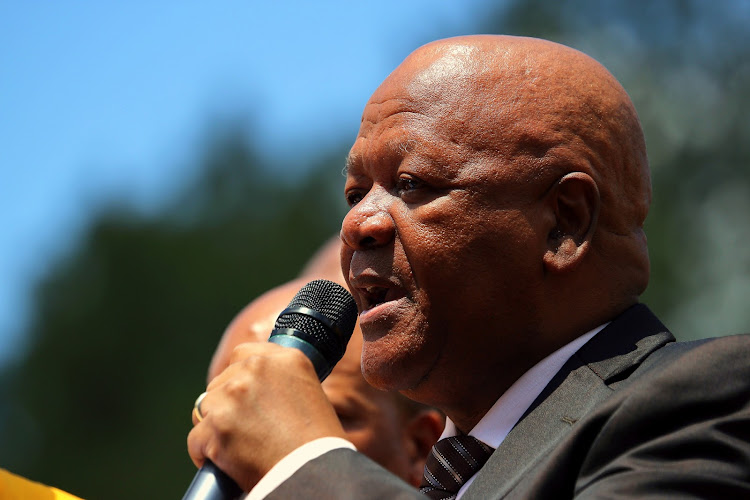 Energy minister Jeff Radebe has insisted that there was SFF board approval for the South Sudan oil project.
Image: Nico Gous

Energy minister Jeff Radebe is embroiled in a mystery $1bn (R14.5bn) oil deal in war-ravaged South Sudan, but his investment pledge has raised eyebrows in government circles - and could land him in hot water.

The minister's team has already spent about R20m pursuing the mystery deal, including hiring a private jet to travel to the underdeveloped country. Insiders said such expenditure is irregular.

Radebe is pushing for SA to invest in building an oil refinery and exploring a new oil block in the east-central African country - despite having been advised against it by the state Central Energy Fund (CEF).

He told the Sunday Times that because the project was at feasibility stage it did not need approval from higher up. But he has already appointed a CEO and six experts to oversee the project.

Nine months after he was appointed energy minister, Radebe signed a memorandum of understanding with his Sudanese counterpart, Ezekiel Lol Gatkuoth, at a public event in November last year.

The signing ceremony took place while his boss, President Cyril Ramaphosa, was crisscrossing the world begging for investment in his "New Dawn" SA.

Radebe's cabinet colleagues said the longest-serving minister may have flouted government processes as the deal has not come before the cabinet and does not have approval from the National Treasury.

However, Radebe's team working on the project has already spent millions on travel expenses, including hiring the jet.

A Treasury official said it made no sense for SA to make an investment of that size when the country is trying to boost its economy by attracting foreign investment.

"We can't be spending this type of money now. Not when we are facing the type of challenges that we are," the source said.

Why would you invest to build a refinery in South Sudan when that type of crude is something we can't use here?

An energy expert who works for a state entity said the project made no sense. "We have a fuel issue. We want investment. Why would you then invest to build a refinery in South Sudan when that type of crude is something we can't use here? Also, we don't understand why the minister and Strategic Fuel Fund [SFF] are not prioritising the Saudi Aramco commitment to build a refinery in SA because we can benefit from that."

The Sunday Times was reliably told that two other foreign governments had done a similar feasibility study and found that the venture did not make sense.

Ramaphosa's spokesperson Khusela Diko declined to comment on whether Radebe had approval from his boss. She referred the Sunday Times to the office of Deputy President David Mabuza.

Radebe yesterday said the project was at an early feasibility stage. But the Sunday Times has seen a letter Radebe sent to the CEF board authorising work on the project. He also informed it of the formation of the New Horizon project, and informed the CEF he had appointed a team to spearhead it.

In the letter, Radebe appointed SFF acting CEO Godfrey Moagi CEO of the New Horizon project and said he will "report directly to me as the minister responsible". He named a team of six experts to work on the project.

"As the CEO of the project, Mr Moagi shall be authorised to execute the necessary due diligence, execute application for the exploration of the upstream oil block B2, apply for concessions for the construction of a new refinery in South Sudan [and] participate in negotiations towards binding agreements," Radebe told the CEF board.

Insiders said it was irregular for the minister to give authorisation and instructions on a project that was approved by neither the CEF board nor the SFF.

Moagi and his team began travelling for the project in June last year. Radebe directed the CEF board to foot the team's expenses.

Asked about the project, Radebe said: "South Sudan project is at feasibility stage. It only needs ministerial approval and Treasury approval after feasibility.

South Sudan project is at feasibility stage. It only needs ministerial approval and Treasury approval after feasibility

"The study is within the delegation of authority of the SFF board and therefore it does not need CEF board approval at this stage. The project will go to the CEF board, minister of energy and Treasury after completing the feasibility study."

However, the Sunday Times understands that the CEF board was approached by the SFF in December 2018 and asked to approve $9m to spend on a full feasibility study for the project.

But that request was rejected because the CEF board - which is in charge of the SFF - did not see it as a viable business case.

Since then, Moagi and his team have continued to travel to South Sudan despite neither the project nor a feasibility budget being approved.

Insiders said there was an attempt last week to get approval from the SFF board.

A source said the SFF board has since rejected the request to ratify the expenditure, rendering the costs incurred so far as irregular spending.

The Sunday Times posed questions about the project to Moagi, who did not respond.

Radebe insisted there was SFF board approval for the project and said the cost of the feasibility study "is within SFF board delegation of authority". He said his team had met with the Treasury recently, but said there was no need for Treasury approval as the project was at an early stage.

Two well-placed sources said the meetings were last-ditch efforts to legitimise the project after costs were incurred irregularly.

Treasury director-general Dondo Magojane said: "The National Treasury met with the SFF and CEF, at their request. They wanted to understand what they need to do to meet the requirements of the Standard for Infrastructure Procurement and Delivery Management and the Public Finance Management Act. We agreed that once they complete the necessary work, including undertaking the feasibility study, they will come back to the National Treasury for the necessary approvals."

The Hawks are probing how Eskom funds earmarked for crucial maintenance of power plants were diverted to the Kusile power station project and other ...
News
3 years ago

Eskom is scrambling to secure a contract for the early detection of leaks on boilers of its power plants before these fissures expand and lead to ...
News
3 years ago

The DA says it will initiate a police investigation into allegations that the recently resigned chair of the Central Energy Fund (CEF) tried to ...
Politics
3 years ago