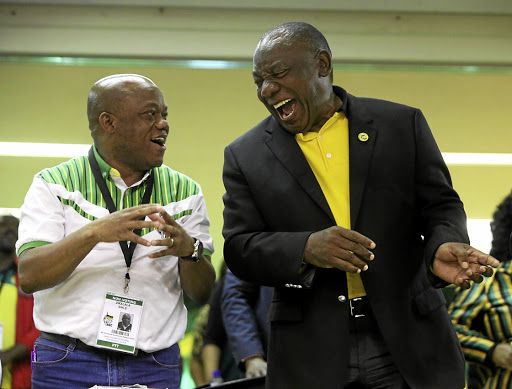 ANC KwaZulu-Natal chair Sihle Zikalala and his provincial executive are trying to quell a brewing revolt against President Cyril Ramaphosa.

The attempt comes amid talk of a plan to call for the president's removal at the ANC's next national general council (NGC), scheduled for next year.

Zikalala told a recent provincial executive committee (PEC) meeting that KwaZulu-Natal leaders should go to the NGC to discuss policy - and not to push for Ramaphosa's removal.

Those who want to unseat Ramaphosa plan to use the ANC's failure to implement some of the resolutions of the 2017 Nasrec conference - including the nationalisation of the Reserve Bank and the changing of its mandate - as motivation to pass a motion of no confidence in his leadership.

Zikalala confirmed raising the matter at the PEC meeting, saying it was public knowledge that there were people discussing Ramaphosa's possible dismissal.

"I still repeat that the issue of recalling leaders is something perpetuated by those who want to see the ANC divided. By its nature the NGC is not a platform of election.

"What I said is in line with the policy of the ANC. The general council does not elect, it is a process where we take stock of what would have emerged before and the progress on the implementation," Zikalala said.

President Cyril Ramaphosa moved decisively this week to head off an apparent plot by ANC secretary-general Ace Magashule to engineer a "parliamentary ...
News
2 years ago

However, the president's detractors in the province remain defiant, and have vowed to ignore Zikalala's plea.

At a meeting called to explain the disbandment of the eThekwini regional executive committee and the suspension of Durban mayor Zandile Gumede at Moses Mabhida Stadium on Tuesday, some branch leaders told provincial secretary Mdumiseni Ntuli that Zikalala did not have the authority to tell them what to raise at the NGC.

Insiders told the Sunday Times the meeting turned into a screaming match, with Gumede's supporters accusing Zikalala, in absentia, of being a "bully" for "imposing" his views on the NGC agenda.

"The leaders addressing us were told by Zandile's supporters to go tell the chairman [Zikalala] that he will be told by ANC branches what KZN's views will be going to the NGC - not the other way around," an insider said.

ANC Youth League provincial chair Kwazi Mshengu, who is convenor of the eThekwini interim regional leadership, denied that the matter came up but echoed Zikalala's statement.

"What we want to be clear about is that we will not be part of anything that goes to an NGC with a view that says the president must be removed or challenged in whatever manner. We will go there to undertake an objective assessment of the ANC," he said.

ANC insiders in the PEC told the Sunday Times that Zikalala's comments were prompted by the recent public spat over the ANC's resolution to nationalise the Bank and change its mandate.

"Since 2007, the NGC has been used as a test of the balance of forces for individuals and factions, which is not the objective of the gathering," a PEC insider said.

"The president is being threatened because the ANC cannot implement the resolution around the Bank - we all know that it is not possible to implement that resolution right now because it will plunge the country into a financial crisis, and KZN will not be part of that."

Another PEC member said the Nasrec policy to nationalise the Bank was fully supported by the province. However, he said, they refused to be "manipulated by factionalists and will stand fully behind elected leaders as we understood why the ownership of the central bank is not possible to change right now".

Sometimes it's difficult to imagine how Cyril Ramaphosa will begin to tackle the enormous problems facing this country given the many hoops he has to ...
Opinion & Analysis
2 years ago

Cyril Ramaphosa has to find a way to give a Sona from rock bottom.
Opinion & Analysis
2 years ago

Is Ace the reincarnation of Dr No?

ANC secretary-general Ace Magashule's not-so-secret guerrilla warfare against President Cyril Ramaphosa over the direction of the ANC and the ...
Opinion & Analysis
2 years ago