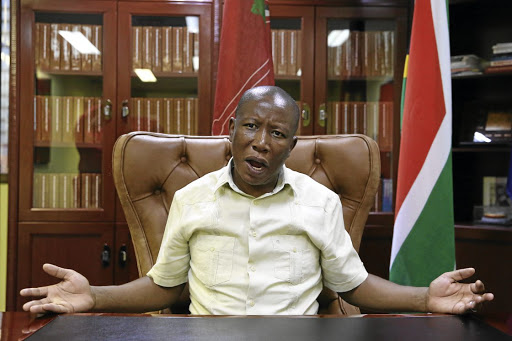 EFF leader Julius Malema says he will never face trial for the corruption allegations against him, calling them a baseless attempt to smear him.

In an interview with the Sunday Times ahead of the EFF "national people's assembly" this week, Malema said claims that he had benefited from the proceeds of crime and corruption in the VBS Mutual Bank scandal were part of a campaign to undermine him. The assembly is the EFF's national elective conference. The three-day gathering is scheduled to start on Friday

Malema said he had not stolen a cent, maintaining that all the money in his bank account and the assets under his name or in family trusts were obtained legally.

The Sunday Times reported last month that Malema had acquired a R5.5m house in Sandown through his Munzhedzi Family Trust, which had received payments from companies linked to the looting of VBS.

This newspaper reported that Malema allegedly used a company named Santaclara Trading as his slush fund to receive money from suspicious companies and individuals.

Some of the money coming into Santaclara would then be transferred to his family trust and SUD, a restaurant in Soweto.

Malema, who had previously declined to comment in detail on the allegations, was more forthcoming this week.

Referring to charges - which he disputes - that the EFF received at least some of the R16m in VBS money paid to Brian Shivambu, brother of EFF deputy leader Floyd Shivambu, Malema said the amount was far too small to help run the party. A single national EFF rally cost at least R35m, he said.

Malema said Floyd Shivambu did not benefit from a cent of VBS money.

He dismissed all the allegations against him as having been instigated by his enemies - the state and "white monopoly capital".

The aim is not to arrest me. They know I have never stolen anything.

"Ask one question - if I am this corrupt and I steal money and do all types of things, why am I not being arrested?" he asked.

"I am the man that is hated by the state, hated by white monopoly capital and hated by AfriForum and white people. Why am I not being arrested?

"If indeed there is evidence, why am I not arrested? Why are they scared of me?"

Malema said former president Jacob Zuma, as head of state, had been able to get the National Prosecuting Authority to drop the corruption charges against him, but he did not have the power to do the same.

"The aim is not to arrest me. They know I have never stolen anything. They just want to taint me, delegitimise me and destroy the voice I have because it is that voice that threatens them."

The EFF leader said his newly purchased house in Sandown was not financed with VBS money.

Blade Nzimande told to choose: party or the cabinet?

Communists want their boss to be full-time on the job.
News
2 years ago

He denied that Santaclara was his slush fund, saying it was owned by his cousin, Jimmy Matlebyane.

But he did not explain why, as reported previously by the Sunday Times, SMS bank notifications about Santaclara transactions were sent to his mobile phone.

Malema said Matlebyane had been involved in business since before the launch of the EFF in 2013, though just two years ago his cousin said he was making R5,500 a month as a security guard.

Malema, citing the On-Point Engineering case in Limpopo that made headlines in 2012, said any attempt to prosecute him over VBS would also come to nothing.

"You just have to taint me and paint me and leave me like that to undermine my anti-corruption message. That is what they did with me in Polokwane, saying I have collapsed the province through On-Point Engineering. I have never been convicted and arrested for that."