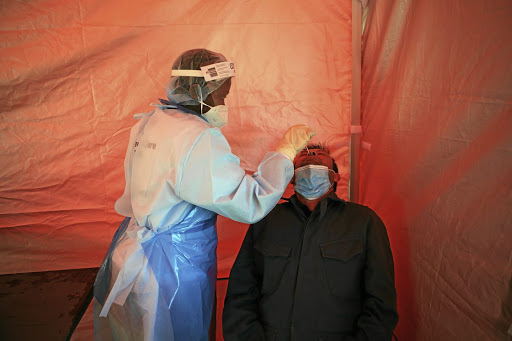 City of Tshwane health-care workers conduct mass Covid-19 testing in East Lynn, Pretoria. The National Health Laboratory Service says there is a 'lot of confusing messaging' about when testing should be done.Picture: Phill Magakoe

When Nombeka Sithole received a negative Covid-19 test result 10 days ago, her family were relieved.

They never imagined that their mother, a nurse from Kokstad, would be fighting for her life in hospital four days later.

During her stay from July 3 to 4, the Margate Hospital test showed she was positive.

She is now on life support in Margate.

Sithole's son, Onke, wrote to President Cyril Ramaphosa this week to express his confusion and worry after his mother, a nurse at the Mount Ayliff provincial hospital in the Eastern Cape, had tested negative in three tests at the Kokstad Private Hospital and that the screening at her workplace had not picked up that she had contracted the virus.

"Mr President, I love my mother. I do not want to lose her to something I cannot see or do not understand," he wrote.

The National Health Laboratory Service (NHLS) says there is a "lot of confusing messaging" about on when testing should be done.

SA is set to break into the top 10 nations with the most Covid-19 infections, but experts say such landmarks are meaningless and the priority is to ...
News
1 year ago

"There is no point in testing a person just after they have been exposed because it takes time for the virus to start multiplying in the respiratory tract [the incubation period is three to 14 days]," said NHLS spokesperson Mzimasi Gcukumana.

"If tested too soon, a person may be negative, only to become positive a few days later. It is important for samples to be collected from the patient properly and at the right time during the course of infection to ensure accurate diagnosis. It is not possible to comment on how common false negatives are, but they can occur," Gcukumana said.

"There are several reasons why this can happen. The PCR [polymerase chain reaction] test detects viral RNA [ribonucleic acid] in a respiratory sample. Usually the virus is detectable for only a short time during the infection.

"Virus levels are usually highest just before a person starts to feel ill and then start to drop rapidly after this. If a person is tested too early after exposure or too late [once the virus levels have dropped], then the test can be negative even though they are infected.

"It is very important to collect the sample at the right time, which is part of the screening process before samples are taken for testing. Other reasons for a negative test could be that the sample was not properly taken or there is a very long delay between sample collection and testing."

A Durban man who had tested negative on June 12 learnt that he was positive following a second test on June 16.

Mr President, I love my mother. I do not want to lose her to something I cannot see or do not understand

"I was retested on June 16, the day I was admitted with suspected pneumonia to Westville Hospital. The false negative had worried me because after I tested I got sicker and sicker, with my fever peaking at 39.1."

Researchers at Johns Hopkins University in the US estimate that those tested for Covid-19 in the four days after infection are 67% more likely to test negative, even if they have the virus. When the average patient begins displaying symptoms of the virus, the false-negative rate is 38%.

The test performs best eight days after infection (on average, three days after symptom onset), but even then has a false negative rate of 20%, meaning one in five people who have the virus have a negative test result.

SA has 264,184 confirmed cases of Covid-19, the tenth highest number of infections globally.
News
1 year ago

A looming shortage of ICU and general ward beds means severely ill Covid patients - even those with medical aid - may not make it through the door at ...
News
1 year ago

As SA traverses the rough seas of the Covid-19 pandemic, the cracks that have been caused by decades of government neglect, state failure and endemic ...
Opinion & Analysis
1 year ago