Why I hire blue eyes before black guys

In her book ‘The Way I See It:The Musings of a Black Woman in the Rainbow Nation’, Lerato Tshabalala describes the perils of being a ‘madam’. This is an edited extract 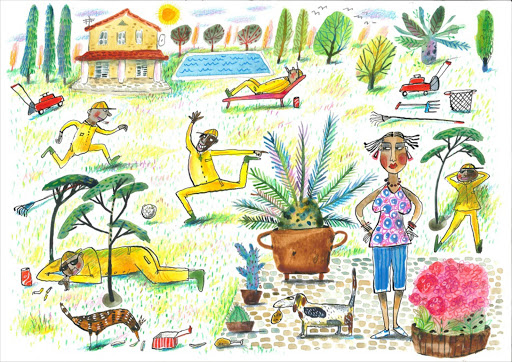 This is an open secret among us brown people in South Africa - it hurts us to admit it, but more often than not, our own people let us down. We're sensitive about this subject.

I guarantee you that I'm going to be lambasted for saying that most of my people are not reliable when it comes to service delivery.

Pan-African activists will take exception to my generalisation and tell me I'm the reason black businesses are not taken seriously, despite the fact that I've generalised about just about everyone in this book.

You see, white people sign contracts, give invoices and don't usually leave without finishing the job. Facts are facts. Y'all might be mad, my people, but you know I ain't lying. Now don't get me wrong, I'm not saying every black service provider is dodgy - not at all. But sadly, the majority of our people are chancers and don't give a damn about customer service.

All you have to do is watch Mzansi Magic's Our Perfect Wedding to see a good example of how black service providers can totally f*** up someone's main event. From late deliveries to ignored text messages and disappearing acts, my people will put you through it.

I watched one episode in which an Indian gentleman baked the wedding cake on the day of the wedding and iced it while it was still warm. By the time it got to the wedding venue, it looked like the Leaning Tower of Pisa.

The bride cried, the people laughed and the groom threw a fit, but the damage was done. When I get great service from someone of colour, I celebrate as if they've just done something extraordinary, when all they've done is their job. That's how traumatised black service providers have left us.

I've got friends, like Lebo from Lucky No8 and Mokgadi from Lotsha Homefoods, who run their businesses efficiently and meet deadlines. But they're few and far between. As a black service provider, I realise what a blemish this casts on us, but it would be disingenuous of me to not keep it real and mention how we are continually let down by our own people.

So after learning this hard lesson with my pool, I decided it might be best to hire someone with blue eyes who had black men working for him. But this also has its drawbacks.

I imagine that if you're white, you won't come across the situation I'm about to mention, but for most black people this is very real: it's the precarious issue of dealing with the over-familiar staff who work for the man with the blue eyes.

As soon as the man with the blue eyes gets into his bakkie and leaves his staff behind with you, they start chatting you up and acting inappropriately. Asking you for juice, telling you how hungry they are and how you look like someone who's got money: "Sis Lerato, ja, maan, I can see that you've done well for yourself, heh. Eish, could I please have that shirt that I saw on the bed in the spare bedroom?" True story.

Builders never finish when they say they will, most come in and turn your life upside down, only to leave your home dusty and dirty

When you're a single woman like me, you're always afraid of being 'jacked or having your s*** stolen while you're not looking, so you give them what they "ask" for. Recently, I had a guy painting my house. He told me he was a "man who prays", so he didn't want to steal anything, but he'd seen a T-shirt and a backpack I wasn't using and politely instructed me to give them to him. Basically what he was saying was that if I didn't give him the items, he'd be forced to steal them.

Sometimes I wear a "wedding ring" so I don't have to field the builders' incessant questions about why I'm single and who takes care of me and do I need a handyman? Such situations are very tricky for women. It's like going to a mechanic - as a woman, you just know their terminology will dupe you into being legally robbed.

Ten years ago I would have bought that s***, but now I try to politely decline any help, because no matter how down to earth you consider yourself, fraternising with the labourers is a recipe for disaster.

Yes, I sound elitist, but you have to remember where I come from. I'd picked up carpenters from dodgy parts of town and had dubious characters run away with my money, all because I chose to be nice.

Yes, builders in general can be annoying - they never finish when they say they will, most of them come into your house and turn your life upside down, only to leave your home dusty and dirty, but at least you can hold them accountable.

The worst kind of renovation, however, is when you have to be in the house when they work. I can't imagine anything worse. For the sake of your sanity and your sinuses, if it is at all possible, let the builders do their bit before you move in.

Having said all that, I hope that instead of being shat on by my people for generalising and bad-mouthing black service providers, that they give me examples of black builders who believe in excellence and never leave the job half done.

Because until such time that I have proof of seamstresses who haven't finished the bridesmaids' dresses on the 59th minute of the 11th hour, I'll continue to give work to men and women with blue eyes. The alternative is not worth the stress or the shrinking funds.

Feel free to judge away.

"The Way I See It: The Musings of a Black Woman in the Rainbow Nation" by Lerato Tshabalala is published by Penguin Random House (R210)