Piet Byleveld — the pathetic, scrawny runt who brought down monsters 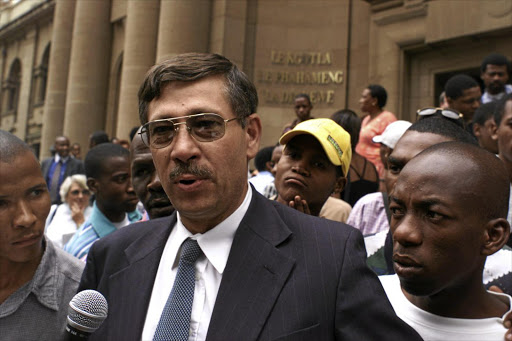 Byleveld outside the High Court in Johannesburg after the Wemmer Pan Killer, Cedric Maake, was sentenced to 1,340 years in prison for at least 23 murders and 15 rapes.
Image: PETER MOGAKI

Piet Byleveld carved a career out of apprehending serial murderers by winning their confidence and building a meticulous case, writes Chris Barron

Piet Byleveld, the detective who brought down South Africa's most feared serial killers, was on duty at the Brixton Murder and Robbery Squad one Saturday in December 1991 when the phone rang.

It was a waiter at the Boksburg Hotel who said he'd just overheard two men discussing a murder in Knysna.

An American student had disappeared two months before on the Outeniqua hiking trail near Knysna, and Byleveld wasted no time. When he arrived at the hotel, Tony Wessels, 30, and Juan Havenga, 17, were still at the bar.

He arrested them, searched their car and found three knives, an axe and a revolver. Then he took them to the Boksburg police station where Wessels threatened to kill him.

"I'm from Brixton Murder and Robbery," said Byleveld. "Don't waste my time." He concentrated on Havenga, who confessed. Byleveld suspected they were a gay couple responsible for other murders as well.

Back at Brixton they told him of a teenage boy they'd kidnapped in Durban and killed in the Drakensberg, and a retired South African Defence Force major they'd left dead in his bath in Pretoria.

He drove them to the Outeniqua trail where they led him to the badly decomposed body of the hiker. Then to the Drakensberg where they pointed out pieces of the boy in a kloof near Giant's Castle. They'd been hungry and braaied him, they said.

He made them carry what was left off the mountain. Then they led him to the air force major's flat where he lay in the bath with his nose half bitten off.

Wessels was sentenced to death, commuted to life imprisonment. Havenga, being a minor, got 25 years.

As he was led to the cells, Wessels glared at Byleveld and shouted that he would kill him when he got out.

"He isn't a candidate for rehabilitation," said Byleveld drily when recounting the story to his biographer, Hanlie Retief. "Serial killers never are."

It was his first serial killing since joining the Murder and Robbery Squad in 1977, and he loved it. "Serial cases challenge the hell out of me," he said.

By the time he retired in 2010, after 38 years in the force, he was acknowledged as South Africa's top detective, with a 99% success rate.

The FBI, Scotland Yard, the Canadian police and Mossad came to him for advice on serial killings. The International Police Association gave him an award as one of the top three detectives in the world.

He didn't look the part at all. Always dressed in a dark suit and white shirt, he looked like an undertaker or the dominee he once wanted to be. He was slightly built and physically unprepossessing, with a cigarette permanently smouldering between his fingers.

In the end it was his three-pack-a-day habit that killed him - just two days before his 67th birthday - rather than any of the killers he put away.

Born on June 6 1950, Byleveld had a brutally tough upbringing on a farm in the Waterberg. He was shy and reserved, he said, "a pathetic, scrawny runt".

A farm worker hanged his sister with some wire when she was three. Byleveld's mother found her in time to revive her. The worker got 15 years. Byleveld denied that the experience had anything to do with becoming a detective.

He matriculated at Nylstroom High in 1968, did his national service in the army and joined the police. He graduated from the police college second in his year. After two years he became a trainee detective.

He joined Brixton Murder and Robbery in 1977. He said their notorious reputation for violence was undeserved, although they took no nonsense. Crime levels were never as low as during the Brixton years, he said.

Before the squad was disbanded in 2001, "the criminals knew the cops were in town", he said.

In 1988 he was invited to join the newly created Civil Co-operation Bureau. He smelt a rat and declined. Several years later it was exposed as a government-sponsored death squad.

In spite of a slightly diffident manner, Byleveld was fairly hardcore. He regretted the fact that the police were no longer feared by criminals, and believed in the death penalty.

But he was no bully. He called his suspects his "clients" and in many ways treated them as such. Within reason, whatever they wanted he made sure they got. He never swore or shouted at them, or lost his temper. He got them to talk by winning their respect and trust.

He pointed out the crime scenes in the company of an independent officer and interpreter, which Byleveld always insisted on to avoid allegations of undue influencing.

He attached the utmost importance to keeping his cases watertight so they'd stand up in court. He was obsessive about detail and doing everything by the book.

South Africa's most notorious serial killer, the so-called Nasrec Strangler, Lazarus Mazingane, had been on the job for 15 months and the police were getting nowhere.

Then, in May 1996, a 14-year-old schoolgirl disappeared while on her way to Parktown Girls' High. When she was found raped and strangled there was a public outcry and national police commissioner George Fivaz called a press conference to announce that he was putting Byleveld on the case.

He was already handling three serial murder cases and only with copious amounts of Grand-pa and Coke could he keep going.

After four years he finally nailed Mazingane, a small, slender, neat taxi driver in his 20s who played music to his victims while he drove them in his spotlessly clean taxi to his killing areas south of Johannesburg.

Mazingane's trial took nine months. There were 270 witnesses, each meticulously prepared by Byleveld. He was found guilty of 74 out of the 75 counts against him and sentenced to 781 years in prison for 16 murders and 22 rapes.

Byleveld never judged his "clients", but he didn't have any empathy with them either. No matter how traumatic their childhoods had invariably been, they didn't have to kill, he said. They always had a choice.

He shook their hands, laughed and shared his braai with them. He drove them hundreds of kilometres to see their mothers. But he never forgot that they were monsters.

The cruellest of the lot, he said, was the Wemmer Pan Killer, Cedric Maake, a slightly built, innocuous-looking suburban gardener and handyman.

He had murdered and raped 15 women in the last year when Byleveld was assigned the case in June 1997.

Byleveld would hang around a murder scene for days, sometimes camping there. He was obsessed with detail. Such as the scrap of tissue he found which had the DNA that six months into his investigation sealed Maake's fate. He was convicted of at least 23 murders and 15 rapes.

At the same time Byleveld was investigating the murders of Indian tailors in the Jeppe area of Johannesburg, all killed with a hammer blow to the head. He found a receipt in one of their shops with a name Maake used as an alias. After confronting him with this, Maake confessed. The Wemmer Pan Killer was also the Hammer Killer.

He was given 1,340 years after a judgment that took four-and-a-half days to deliver.

Court proceedings were like a game of chess for Byleveld.

"You're continuously being challenged," he said. "Those bloody advocates. They sit there with their degrees, and then this ordinary old cop thrashes them in the witness box."

In 2004, while tracking down serial child killer Sipho Dube, Byleveld was asked to solve the Leigh Matthews killing, a couple of months after she'd been kidnapped and 35 days after her body was found next to the highway in Walkerville.

When he arrested him, Moodley said he thought he'd got away with it until he heard that Byleveld was on the case. He'd been expecting him ever since, he said.

"What took you so long?"

Byleveld's obsession with hunting down serial killers was both a refuge from, and the death of, a grossly unhappy, childless marriage.

He is survived by his second wife, Elize, whom he married in 2011.