Blade must own up to giving us Zuma, says Mbeki man 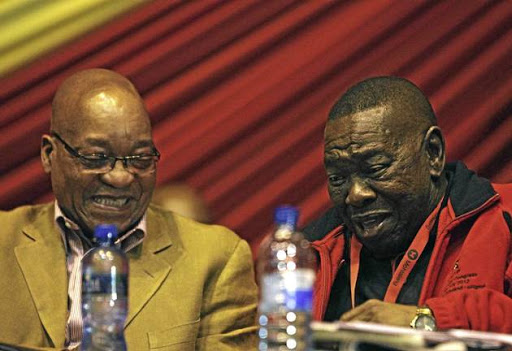 The SACP and its general secretary, Blade Nzimande, have become models of inconsistency in their quest for cabinet power, writes Mukoni Ratshitanga

When, in 1999, the then premier of Mpumalanga, Ndaweni Mahlangu, remarked, extraordinarily, that "I personally don't find it to be a very bad thing" for politicians to lie, few would have thought that he was reflecting on a wider infirmity that afflicts many in the South African political class.

One of those affected is arguably the South African Communist Party

On Monday the SACP issued a statement in which it bemoaned the tragicomedy that has become our politics and country under Jacob Zuma's presidency.

The party welcomed the ANC national executive committee statement that called for an independent judicial commission of inquiry into state capture and said: "This is a call first made by the SACP, long before the former public protector's 'State of Capture' remedial requirement."

This statement pretends that the SACP leadership has been consistently principled on the issues it now decries.

But is this the case?

In an interview with Independent Newspapers on December 31 2012, SACP general secretary Blade Nzimande, then riding many kilometres above sea level on the crest of the ANC Mangaung conference wave, told journalist Bheki Mbanjwa that "there is this hatred for the president, especially by sections of the elite, including elites in the media ... For them it's not that the barbarian is at the gate but that the barbarian is inside the gate."

This characterisation of criticism of Zuma in terms of "hatred" sought deliberately to delegitimise every critical reflection as unworthy of a hearing.

Needless to say this novelty — "hatred" as the reason for criticism of leaders — has never been part of the democratic movement's analytical framework.

History has correctly always been seen as a contestation of differently aligned social forces who take to battle to privilege one social system over another — not because they find this or that individual's physical features attractive or otherwise.

A month before, in November, Nzimande — sounding more like an imbongi (praise singer) than a minister of higher education who, more than anyone else, should promote critical thought and inquiry — had called for insult laws to shield Zuma from criticism.

By April 2014, Nzimande would caricature news reports on the (ab)use of public resources in the Nkandla construction as "lies perpetuated by white people".

One can effortlessly catalogue, ad nauseam, the collusion of Nzimande and other SACP leaders in getting the country to the present precipice.

Unless the SACP owns up to its litany of complicity, it will be difficult for those who appreciate the necessity for its existence to take it seriously - or to take seriously the capacity of the protagonists in the debauchery of which the party has been a part for nearly two decades to contribute meaningfully to the search for solutions.

Take the SACP's view on the Seriti commission of inquiry into allegations of arms procurement impropriety. In its statement, the party contemptuously dismisses the commission as "a whitewash", but does not tell us why.

Except perhaps for a vague hint contained in its statement of November 23 last year, when the SACP said Zuma appointed the commission "while he was a possible subject of investigation", we are none the wiser about what the SACP might possibly mean by "a whitewash".

It is as if the commission was "a whitewash" because the SACP said so.

Those like Patricia de Lille — the original so-called whistle-blower who has for years screamed out, alleging corruption in the arms-procurement process — are yet to provide such evidence.

De Lille's performance at the commission was, to put it charitably, laughable.

Others simply walked out of a process for which they had been calling for years.

This has not, however, dissuaded De Lille and her fellow travellers from insisting that the commission was "a whitewash". Could this be where the SACP takes its cue?

Once Zuma accepted the commission's report, presumably after a discussion in the cabinet where no fewer than five SACP leaders sit, it became the government position.

Not a word has come from the SACP since the commission released its report - until now.

And now, out of the blue, comes the allegation of "a whitewash" possibly because, as seems to be the party's method of doing politics, nothing must stand in the way of the sustenance of the individuals that lead it — in this case, securing positions at the ANC's elective conference in December — even if it means the SACP must jump into bed with the very political forces it opposes. Or shall I say "in theory"?

• Ratshitanga was previously a spokesman for former president Thabo Mbeki