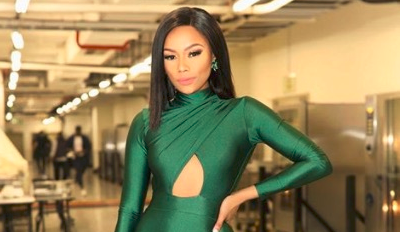 After being recalled from book stores across the country because of grammatical and factual errors, Bonang Matheba's book has been polished and is back on shelves.

The revised version of Bonang: From A to B was launched on Thursday night at Mall of Africa.

In a statement issued to TshisaLIVE Bonang said she learnt an invaluable lesson through the recall of the book.

"As daunting as the process was, it taught me that sometimes things do fall through the cracks, and I felt it was a lesson that could not only be learned by me, but also by those that are to come after me. I truly am grateful to my fans for the love and continued support that they have shown me through it all – and continue to be by my side."

The book also made headlines over a chapter which addresses the alleged abuse she endured from an ex-boyfriend.

Even though no name was mentioned in the book, it alluded to her ex-boyfriend, DJ Euphonik. It was reported that Euphonik and B's former bestie, Somizi Mhlongo turned to their lawyers to have their names removed from the book.

Bonang's camp told TshisaLIVE that Euphonik's name was never mentioned in the book and no changes would be made.

Rapper Riky Rick got tongues wagging after a video of him mocking one of his young crew member's fake sneakers started doing the rounds on social ...
TshisaLIVE
4 years ago