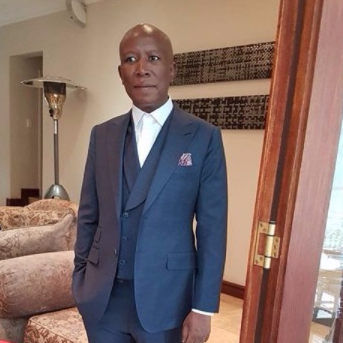 The creator of a dance song using a mash up of EFF leader Julius Malema's popular reference to President Jacob Zuma as "Duduzane's father" has revealed he created the track to educate people about current affairs  and not as a political statement.

Duduzane Zuma is one of president Jacob Zuma's sons, who is a confirmed business associate of the Gupta family. The reference gained popularity during the recent vote of no confidence through a secret ballot in an attempt to "oust" Zuma as the country's president. The EFF refused to refer to Zuma as the president and instead called him "Duduzane's father" much to the annoyance of ANC parliamentary members.

Thabo told TshisaLIVE he was honoured by the response to the song and that he was amazed to find that it had trended on Twitter and  YouTube.

"I have been making music for eight years but this is the first time that one of my songs have spread so quickly. It is trending and people are doing dance challenges to it. It is incredible. I think that it is so popular because people can relate to it," he said.

Thabo said he was "not a politician and not making a political statement with the song" and simply wanted to show the light-hearted side of parliament.

"I try to keep up with the latest politics and when I was watching the clip of the EFF in parliament I thought it would make for a great song. I always try to educate people while entertaining them and so in that way they are aware of current affairs while still being able to laugh, or dance," he added.

Thabo's track has been hailed by musicians and celebrities across the country and was even retweeted by EFF spokesperson Mbuyiseni Ndlozi.

"No politicians have reached out to me but Mbuyiseni retweeting his approval meant a lot. It was nice to know that they are in touch with what is trending on Twitter," he said.

Bonang Matheba has revealed her strategy to deal with being 'dragged' on Twitter is mastering the skill of "ignoring" trolls every day. Queen B ...
TshisaLIVE
4 years ago

Local star Nandi Madida was not at Minnie Dlamini and Quinton Jone's white wedding over the weekend but she more than played her part in their ...
TshisaLIVE
4 years ago

AKA blasts cheating rumours: Bonang and I have never been stronger

Rapper AKA has come out strongly to slam cheating rumours surrounding his relationship with girlfriend, Bonang Matheba, saying they are stronger than ...
TshisaLIVE
4 years ago