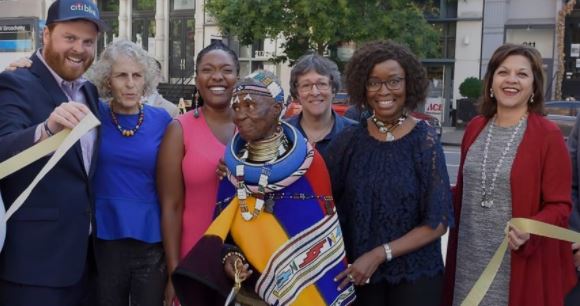 Traditional artist Esther Mahlangu is "excited and honoured" to have her bold Ndebele artwork brighten up the streets of New York in the form of a mural dedicated to her.

The mural spans a two-lane road near Lower Manhattan in New York and showcases Ndebele symbols that have become synonymous with Esther's work worldwide.

Esther has exhibited her work around the world for over 28 years and has collaborated with global brands on numerous projects.  However, Esther told TshisaLIVE that she still felt excitement when presented with the opportunity to have her work displayed in America.

"It wasn't my first time working on a project in New York, I always go there to paint and take my artwork to sell but it is special to show off my artwork to the world," she said.

Esther said that painting was her passion and something she always knew she wanted to to do.

"I grew up painting from an early age. I love painting with all of my heart and it is my passion," she added.

The mural was painted by New York-based artist Imani Shanklin Roberts, who returned from a year-long hiatus to join a project, which forms part of a tourism partnership between South African Tourism, bicycle service Citi Bike and South African Airways (SAA).

Speaking of her experience on the project, Imani paid tribute to Esther.

"Creating a mural in honour of an artist I've known all my life, in a city that isn't welcoming to many, feels unreal. It feels like an aligning moment many of us have when the universe co-creates with us and is in agreement with our path," she said in a statement.

At the recent unveiling of the mural in New York, president of South African Tourism's American Hub, Bangu Masisi said Esther did an amazing job in showcasing African culture to the world.

"Esther Mahlangu is renowned the world over for her unique, colourful and geometric paintings which have inspired international brands and artists of many backgrounds across the globe. Her work has also done an amazing job of showcasing our cultures and will provide New Yorkers this summer with a sight of South Africa’s vibrant Ndebele culture," he said.

Reality TV star Sibongile Masuku has recently shared her disapproval of a polygamous lifestyle, explaining that she's just not interested in sharing ...
TshisaLIVE
4 years ago

SAMA-award winning rapper iFani has hit back at a suggestion by Metro FM DJ Rashid Kay that the rapper was no longer relevant and part of local ...
TshisaLIVE
4 years ago

There was a time when actress Asanda Foji was told that the only way she could "break into the industry" was by faking a smile and acting flashy on ...
TshisaLIVE
4 years ago

The creator of a dance song using a mash up of EFF leader Julius Malema's popular reference to President Jacob Zuma as "Duduzane's father" has ...
TshisaLIVE
4 years ago