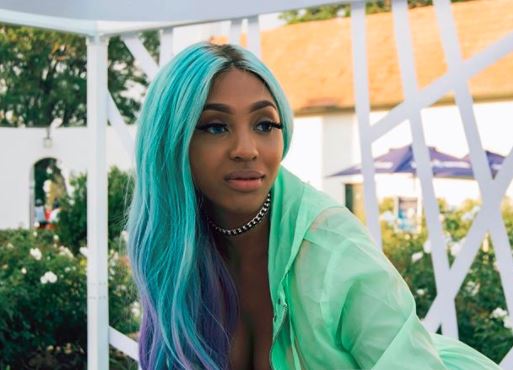 Rapper Nadia Nakai was upset after being dragged on social media.
Image: Via Instagram

Major League's  Bandile Mbere was there to comfort and support an upset Nadia Nakai after she recently received hate on social media after a picture of her wearing no make-up went viral.

Speaking to Metro FM's Mo Flava and Masechaba Ndlovu, Nadia's bae said he skipped work to try comfort the star after the snap caused a stir on social media.

"She was very upset. I was trying to be there for her all the time. ( I even) skipped work sometimes to be there by her side. (I told her) things are going to be okay. (You know,) go to movies, take her out, make her forget what is going on on Twitter."

He said he told her not to worry about the hate because it often came from people who were jealous of her.

"I have been through a time when social media also came and attacked me. I always tell her that she mustn't worry about what people say, at least she is making money. She's blowing up. She's doing very well. Her song is doing very well. The attention is on her and people will try to bring her down. Unfortunately, it will be girls because probably those girls’ men are talking about her."

Breaking her silence on the criticism that saw her trend under the hashtag "Nadia Nakai no make-up challenge", Nadia said she was not embarrassed by the picture she posted.

"I am human and when I'm spending time with bae, I'm not going to waste time 'face-beating' when we are chilling. I go shopping without make-up. I take pics with fans without make-up. Like, that's my life and I will continue doing that."

Musician DJ Zinhle has responded to weekend reports claiming she had found love in the arms of flashy Namibian businessman Collin Venaani, explaining ...
TshisaLIVE
3 years ago

Skolopad is pushing an unapologetic attitude after her latest risqué pose left Twitter in a tizz because of the sexual nature of the caption. And her ...
TshisaLIVE
3 years ago

Zodwa Wabantu continues to enjoy the fruits of success and has declared war on anyone who thinks of trying to stop her progress.
TshisaLIVE
3 years ago

Chicco Twala has defended Kelly Khumalo amidst ongoing speculation that the singer played a part in the death of Senzo Meyiwa and was covering up who ...
TshisaLIVE
3 years ago