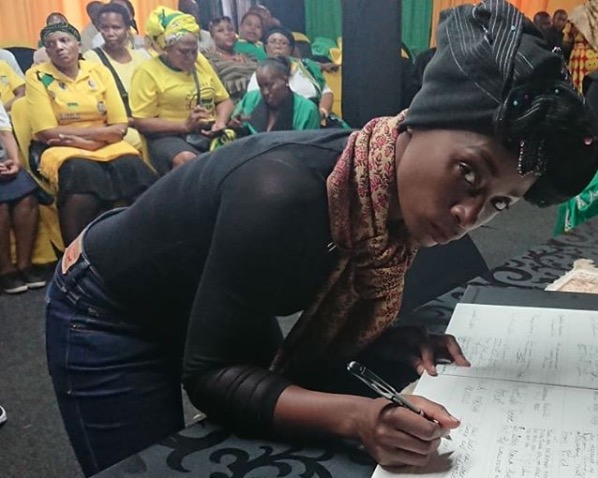 Hlubi Mboya was among the group of actors who visited Ma Winnie's house.
Image: Via Instagram

Several actors and actresses united to pay their respects to Winnie Madikizela-Mandela by visiting her home in Soweto.

Ever since news of Ma Winnie's death was confirmed on Monday afternoon, people from all walks of life have flocked to her house in Masedi Street, Orlando West in Soweto to pay their respects.

Thousands of mourners have paid their respects to the fallen struggle hero by laying flowers and lighting candles. Mourners have also been seen celebrating her life through song and dance.

High-profile personalities including President Cyril Ramaphosa, several other members of the ANC and EFF leader Julius Malema, who Ma Winnie described as "her son," have visited the family during the course of the week.

"Sisters in the arts, in solidarity to pay respect to the Mother of the Nation and family.  Lala NgoXolo Mama. Duduzekani ba Kwa Madikizela, ba Kwa Mandela," said Kgomotso.

Ma Winnie, who died at Milpark Hospital, will be given an official state funeral on April 14.

A post shared by Kgomotso Christopher (@kgomotso_christopher) on Apr 4, 2018 at 1:16pm PDT

OPINION: I am white and I am mourning Winnie Madikizela-Mandela

We were mostly at peace with ourselves as a nation when Nelson died, now comes the real test.
TshisaLIVE
3 years ago

The ANC will provide 15 buses in Soweto to transport its members and supporters to Winnie Madikizela-Mandela’s home on Thursday.
Politics
3 years ago