Childish Gambino has left that hug up to interpretation, but just like his This is America music video, it will sure have people talkin'! 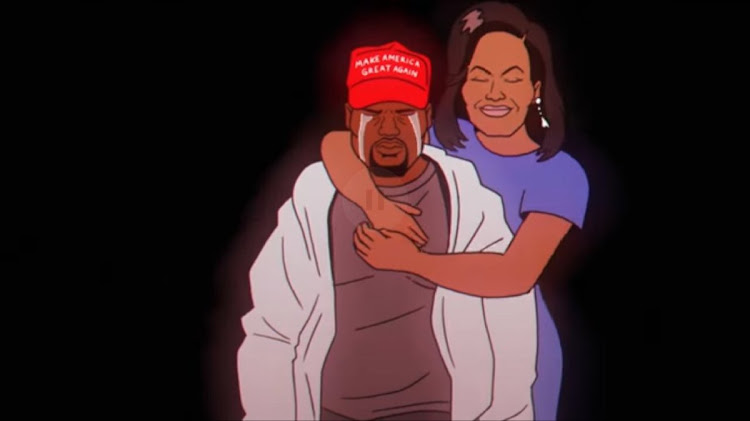 After the commotion Childish Gambino's This Is America caused with all its symbolism, the artist has released yet another video that will have tongues wagging, as it features a somewhat apologetic Kanye West being embraced by Michelle Obama.

Childish Gambino sure is coming for all the awards where music videos are concerned. Right after releasing the visuals for his Feels Like Summer, he landed on the international Twitter trends list.

While the animated visuals caught the world's attention, it was the cameos included in the video that caused all the noise, particularly Kanye West.

Just days after Kanye West apologised for his "slavery is a choice" narrative and any "offence" caused by his support for Trump, Childish Gambino showed him crying and then receiving a hug from Michelle Obama.

Tweeps and international media have since interpreted the visuals differently, particularly the Kanye West and Michelle Obama scene.

I was reading tweets about Childish Gambino’s newest video, specifically the Kanye/Michelle Obama moment. I just thought Michelle was giving Kanye a hug because he struggles with depression and general public opinion, and probably low self esteem.

I need someone to help me understand why black women are offended by Michelle Obama hugging Kanye West in Childish Gambino’s new video. I thought we all supported the sentiment that the only person that can hold down a black man is a black woman? 🤨🤔

I didn’t get the impression that Childish Gambino was saying Kanye needs a black woman to save him at all. Just forgiveness

The video is directed by Donald Glover, Ivan Dixon and Greg SharpCharacter, designed by Justin Richburg and co-produced by Fam Rothstein for Wolf + Rothstein.

The clip also alludes to a number of contemporary pop culture stories, like the scene where a cartoon resembling Travis Scott appears to be destroying a block tower made by Nicki Minaj, a possible reference to their sales battle that prompted Nicki lash out at him on social media.

Childish Gambino is the most woke nigga in the music industry. It’s way more than Travis & Nicki. He’s showing how hard you can work to perfect ur craft for publishing & how easy it can be for someone to just come in & disrespect & destroy all the hard work you’ve put in. pic.twitter.com/TTfIvYJ6w1

Other cameos in the music video include artists like Trippie Redd, Lil Pump, Lil Uzi Vert, Chance the Rapper and Solange.

Check out all of the cameos on Childish Gambino’s animated music video for “Feels Like Summer.” pic.twitter.com/EG0gcv97MD

See who else you can spot? Watch the video below:

Ami says sometimes we need to take things into our own hands and enter a reality show competition.
TshisaLIVE
3 years ago

Prince Kaybee is returning to the show he once won as a contestant.
TshisaLIVE
3 years ago

Naima Kay is ready to remind Mzansi of her killer vocals with new music.
TshisaLIVE
3 years ago