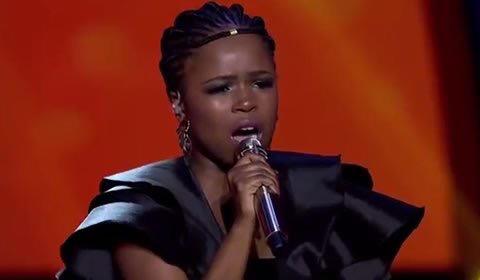 Idols SA teen sensation Yanga Sobetwa has got the thumbs up from a number of local stars.
Image: Twitter/ Mzansi Magic

The competition still has several more weeks to run but Idols SA hopeful Yanga has already impressed the likes of Zahara and Amanda Black.

Fans of the star nearly had a heart attack when their fave was left on stage with Xae waiting for Proverb to announced who received the least votes for the week. Xae's number came up and she left the show.

Yanga celebrated her narrow escape by giving a show-stopping rendition of Zahara’s Xa Bendingena Mama  and closed the show with If This Isn’t Love by Jennifer Hudson.

Her performances got the attention of Amanda Black and Zahara, who both took to social media to applaud the star and offer their support.

The social media streets were a mess after Yanga's performance as memes and messages flew around the net.

I am King B fan...but I am must admit Yanga is our next idol #IdolsSA pic.twitter.com/TxwnlkywYu

Fan favourite King B also dominated the night with a stirring performance of Kelly Khumalo’s Baby Please and Adele’s Make You Feel My Love.

He got a standing ovation from both Somizi and Unathi

Unathi even encouraged him to launch a one-man show so she can listen to him for three hours.

Can we have an audit on who keeps voting for Thato?
TshisaLIVE
3 years ago

Twitter already has a top three, but will there be a plot twist in the mix?
TshisaLIVE
3 years ago