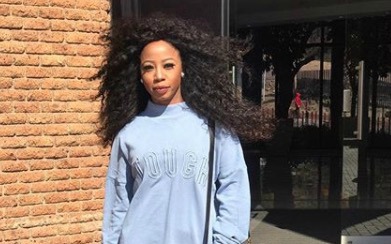 'Whatever they sweep under the rug will come to light,' says Kelly Khumalo.
Image: Via Kelly Khumalo Instagram

Kelly Khumalo said “questionable working conditions, such as dirty bathrooms”, on the set of the Lebo Mathosa biopic resulted in her pulling out.

Kelly was to play Lebo in the upcoming production, titled Dream: The Lebo Mathosa Story, based on the life of the iconic late kwaito star, but was unexpectedly replaced by actress KB Motsilanyane.

During an interview on Metro FM late last week, Kelly said the working conditions made it difficult for her to do justice to the role.

“It's either the work conditions changed or 'we just don’t have the talent'."

Kelly said the actors were exposed to dirty bathrooms and that when she complained she was called a “diva”.

Well-known film producer Legend Manqele told City Press Kelly had joined forces with him, as she was on a mission to rebrand herself.

He also told the publication that Kelly felt she could not work under the conditions on set.

“Kelly felt that working under these conditions was limiting her ability to honour the talented icon that was Lebo Mathosa and execute a sound performance.”

During an interview with TshisaLIVE last week, Kelly made it clear that she knew her “self-worth” and would no longer settle for anything less than what she deserved.

LISTEN | Kelly K says her new single is NOT a clap back:

Even though she was not ready to spill the tea, she did allude to there being more to the situation than what had been leaked in the media.

“I will not talk about the biopic, but what I can say is that they can say whatever they want about me, they [producer] know the truth. Whatever they sweep under the rug will come to light.”

Kelly's latest single, Undithatha Kancinci, which dropped on Friday, speaks about her being tired of being overlooked.

Somizi praises Bahumi for Lebo Mathosa gig: I’ll be cheering from the sidelines

He recounted the moment Lebo first met Bahumi as a little girl and how the star loved her like her own child.
TshisaLIVE
2 years ago

Somizi stands by his daughter after 'Lebo Mathosa' role hate

'The Lebo Mathosa Story' is a six-part BET Africa drama series that tells the story of her incredible life.
TshisaLIVE
2 years ago