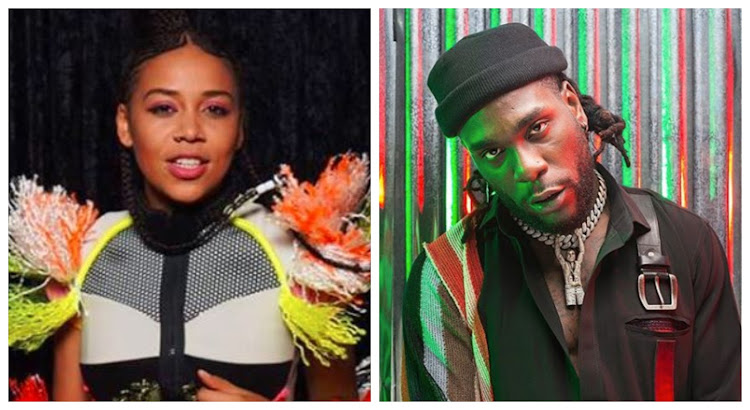 Nigerian musician Burna Boy and Sho Madjozi got into a war of words on Thursday after the SA rapper blamed Burna for their remix suddenly being taken off of streaming services.

Sho claimed in a long Twitter thread that Burna and his label were responsible for taking down the remix of Stormzy’s Own It, in which she was featured.

“For those asking where the Own It remix is, after I got nominated alongside him for BET Best International Act, Burna Boy asked Stormzy’s team to take down the song immediately. Song was out for a whole month before that, no problem," she said in the tweet.

Song was out for a whole month before that, no problem.

I could be wrong. Maybe he has other reasons. But BET announcement was on June 15th and by June 17th I was getting complaints from fans saying they can’t find it.

Either way, spirits up ✨ pic.twitter.com/QU66iICG1D

Own It originally featured only Ed Sheeran and Burna. A remix featuring Sho was released in May, but has now been removed from streaming services.

Sho went on to explain that the song was coincidentally taken down just after it was announced she would go up against Burna and Stormzy and four other male international artists.

The John Cena hitmaker won the award for Best New International Act in 2019, and mentioned that she and Burna were cool last year at the awards. Which is why his alleged actions confused her.

“Well, I guess it’s a good sign if manna shook. Last year BB and I were cool at the BETs. I guess everyone thought this little girl isn’t a threat, now same category? It’s shaking.”

“In the words of the great Toni Morrison: ‘If you can only be tall because someone else is on their knees, then you have a serious problem.’ This world is full of bullies. If I leave any message at all from the life I’ve lived, I hope it’s to not be discouraged and to not be intimidated. To stay loving, kind and honest in the face of cruelty."

Goodluck to everyone nominated. It’s up to the judges now 💃🏽 (I hope they heard my own it verse before it was taken down 😂🙈)

Sho's claims got a lot of attention on the TL, and when Burna saw her tweets he responded, denying malicious intentions on his part.

He said the song being taken down may have something to do with it not being cleared properly by his label.

“Own It is not my song. If my voice is on it, however, it should have been properly cleared. If the remix wasn’t cleared with the label (Atlantic US) it automatically gets flagged. Nothing to do with me personally or any award. Always best to reach out professionally. Congrats on BETs!”

1. The song got automatically flagged a month late by coincidence

2. When they said YOU wanted it down they meant your label

3. A big international label would release a song without clearing it

Sho Madjozi get emotional after she bags BET nomination: 'I am in tears'

Sho could win a second BET in two years.
TshisaLIVE
1 year ago

Sho Madjozi is a proud African, Cava these Xibelani looks!
TshisaLIVE
1 year ago

Another smash hit from Sho Madjozi?
TshisaLIVE
1 year ago

"World, we have one message for you, Africa is coming and we are coming for you," said an excited Sho Madjozi
TshisaLIVE
1 year ago