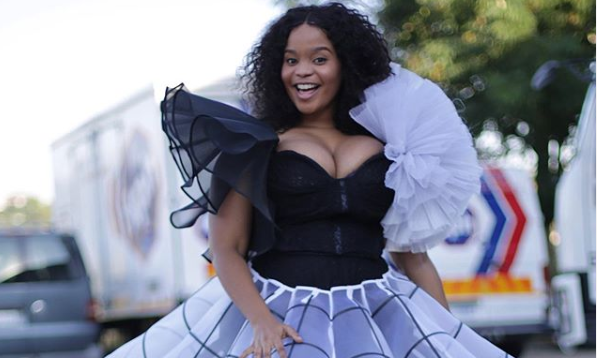 As the wedding between Uzalo's Sbonelo and Sphilile gets closer, fans can't help but look forward to the pending drama about who will end up as Sbonelo's wife between Sphilile and Nonka. Actress Tee Xaba, who plays Sphilile, shared her thoughts on what's about to go down.

In an interview with TshisaLIVE, Tee revealed that Sphilile's weakness is love and a mild case of low self-esteem.

HERE IS WHAT SHE HAD TO SAY:

“When I started out obviously I had to just feel out what Sphilile was like ... what she liked and what she didn't like. Having been on that journey has been nothing but exhilarating fun and she's been nothing but a joy. I now know that she's just a sucker for love ...”

The actress added that while Sphilile was the kind of woman to follow love to the ends of the earth, Tee would never compromise her self-worth in the name of love.

“I am a sucker for love myself, I am a hopeless romantic. But like I said, I am not stupid in love though, I would never forget who I am just because I am in a relationship. I still know my worth, which is what I don't think Sphilile really sees. She doesn't consider herself to be all that important. I think she downplays how amazing she is, which is nothing like me,” Tee said.

The character she plays has no idea that she might be marrying into a polygamy situation, though at this point the fans of the show are almost convinced that will be the case. Her on-screen hubby to be, Sbonelo, is in love with two women and is not willing to let either of them go.

While Tee is almost sure that if placed in that situation, Sphilile would eventually go along with being a first or second wife, Tee knows for sure that, personally, polygamy is a no-go area for her.

“Never would I ever agree to marry into polygamy. It's a no no for me. It will never happen. I will never accept it, haai xha! Ang'geke!”

There's about to be a showdown on Uzalo. Whose team are you on?

Kahle kahle who is S’bonelo getting married to❔🤔🤨 Congrats to our Two LIVE video winners @musah_zwane & @syethemba_zulu who’ve won R1000 in grocery vouchers courtesy of @viusouthafrica #UzaloIsBackOnViu #Uzalo I #Viu Quizzes back on from Tomorrow night!

Uzalo's Thuthuka Mthembu gets real about fame and Covid-19

"The reality is that being an actor in SA is not as glamorous as people make it out to be. People have an expectation of what it should be like but ...
TshisaLIVE
1 year ago

“I see myself working with Menzi because of his acting range, presence and energy. I see myself in him and he is one of the people that I want to ...
TshisaLIVE
1 year ago

'Uzalo’s' Wiseman on challenges of being a single father

"I made a promise that I'll do everything in my power to raise Lwandle in a Godly and responsible way. I don't want her to feel that she has one ...
TshisaLIVE
1 year ago

WATCH | Uzalo off screens for a month, despite cast and crew returning to set

Actress Baby Cele gives us glimpse of life on set.
TshisaLIVE
1 year ago