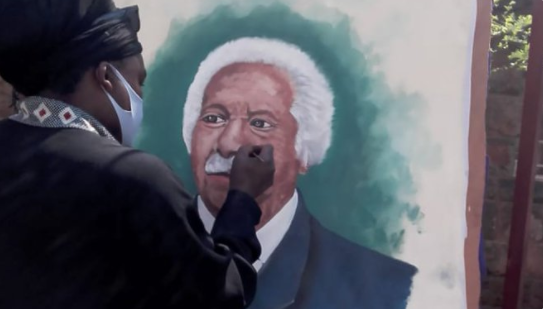 Controversial funeral painter Lebani “Rasta” Sirenje has again sparked anger and calls for someone to take away his brushes, after unveiling a portrait of late human rights advocate George Bizos.

Bizos, who famously represented Nelson Mandela in the historic Rivonia trial, died last week at home of natural causes. A funeral service was held for the activist on Thursday at the Hellenic Cultural Centre in Johannesburg.

As friends and admirers flooded social media with messages of condolences and tributes, Rasta posted a portrait he had done of Bizos.

Today is the funeral of the honorable George Bizos. RIP. pic.twitter.com/4OeJF0MWNJ

There were mixed reactions to the painting, with many slamming Rasta for being “disrespectful” and labelling him an “attention seeker”.

While most agreed that the painting looked nothing like Bizos, there were several wild guesses as to who it did resemble.

Some said Morgan Freeman, others joked it looked like a “dark skinned Albert Einstein!".

Still, the guesses and mocking memes kept flooding in, and soon Rasta yet again found himself on the trends list.

What are you doing Rasta man pic.twitter.com/fQPqk4nKlc

Whatever Rasta is smoking I want double of it🙄💔🤣 pic.twitter.com/u6XMtZfWWG

Rasta is still talented, he needs to stop telling us who he portrayed, just keep the random drawings coming, he might land on me too😅 pic.twitter.com/BFhFfi6Qm9

In front of pham'bi kwabantu mara Rasta... why did you tag him?
TshisaLIVE
1 year ago

Many celebrities, living and late, have been victims of Rasta's botched paintings.
Lifestyle
1 year ago

Spiteful or genuine? Rasta slammed for his Zenande Mfenyana portrait

Spiteful or genuine respect? Twitter has a lot to say about Rasta's painting of Zenande Mfenyana.
TshisaLIVE
1 year ago