OPINION | Black lives matter until it is Africans, then the whole world develops hearing problems 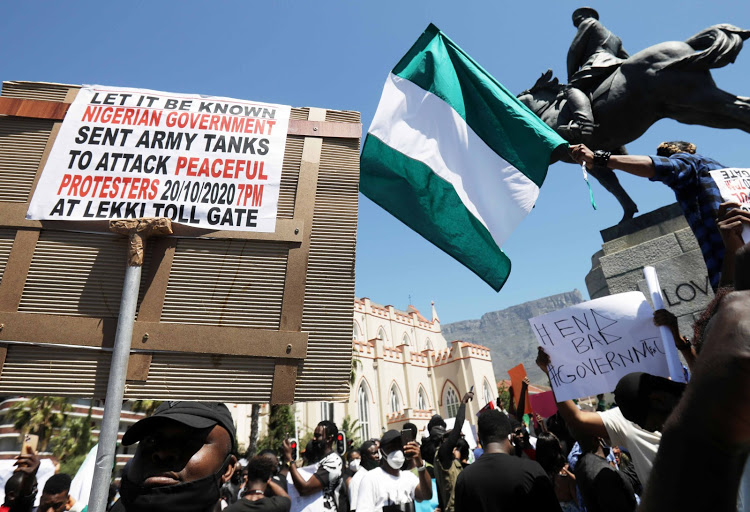 Nigerians based in SA marched to parliament in Cape Town on October 21 2020 to join the #EndSARS protests in solidarity with Nigerian youths who are protesting against police brutality and the Special Anti-Robbery Squad.
Image: Esa Alexander

Africa is bleeding! Can the world just stop and see what's happening to the most richly resourced yet poorest continent.

As in the old days of slavery, Africans are still enslaved, tortured, raped and murdered in ways that should have the world coming to a standstill as it did for George Floyd or Breonna Taylor.

In May this year, many parts of the world, including Africa, mobilised protests against the horrific nature of George Floyd's senseless killing at the hands of a white policeman. Not only did we [Africans] march, but we also flooded social media with messages of support showing how we were standing in solidarity with our African American brothers and sisters.

Even though we are oceans apart, we made it clear how outraged and appalled we were about the police brutality of black people in the States.

Now fast forward to October, the coin has flipped, things are bad in Africa. From human trafficking, femicide attacks to senseless killings by the police, almost every country on the continent is experiencing some sort of brutality but are we even trending there by American black Twitter?

Why not? Maybe Africa is not bleeding enough for the world to take to the streets and protest against the senseless sh*t that's happening in “the motherland”.

On October 20, Nigerian soldiers opened fire on protesters demonstrating against police brutality in the Lekki district of the commercial capital Lagos.

This after thousands of Nigerians have been demonstrating nationwide every day for nearly two weeks against a police unit, the special anti-robbery squad (Sars), that rights groups had for years accused of extortion, harassment, torture and murder.

The unit was disbanded on October 11 but the protests persisted, with demonstrators calling for a raft of law-enforcement reforms. Viral videos of the senseless shootings left African black Twitter enraged, with hashtags #EndSARS and #LekkiMassacre dominating the trends list on Wednesday. Mzansi celebs such as Cassper, AKA, Boity, Pearl Thusi, Nasty C and Moozlie sent their love and support to protesters in Nigeria.

Things are not only bad in Nigeria, Congo is also now enduring a “silent holocaust” where many Congolese people are being brutally killed.

Here in SA, we've been fighting against the abuse and killing of women and children through the #AmINext movement but that doesn't seem to be grabbing any consistent international attention.

These above mentioned three countries are just a drop in the ocean of the number of fatal issues faced by other countries in Africa. I repeat, Africa is bleeding, can't you see?

For hundreds of years, Africans have been suffering and it's so disheartening that even in a year such as this, we still continue to suffer and die.

Yeah, sure Beyoncé, Rihanna, Gabrielle Union and many other global celebrities used their platforms to bring awareness of what's happening in Africa but, sadly, that's not enough.

A friend of mine made some sense when I was busy gathering my thoughts around this piece. He said, “As Africans, we need to practise restraint sometimes ... let's be honest they [African Americans, and so on] never asked us to join their protests. So why are we expecting so much from them?”

If someone had told me this was how the year 2020 would pan out, coronavirus, bloodshed, you name it ... I'd definitely side-eye them and keep it moving because, gosh, it's like we're acting out roles in a movie, surely this is not real life?!

"Beware of people who hijack slogans to portray hate and discrimination. You can be proudly South African without being xenophobic," Cassper Nyovest ...
TshisaLIVE
1 year ago

These celebs want to bring all eyes on Nigeria.
TshisaLIVE
1 year ago

Don't come for Nasty C unless he calls for you!
TshisaLIVE
1 year ago