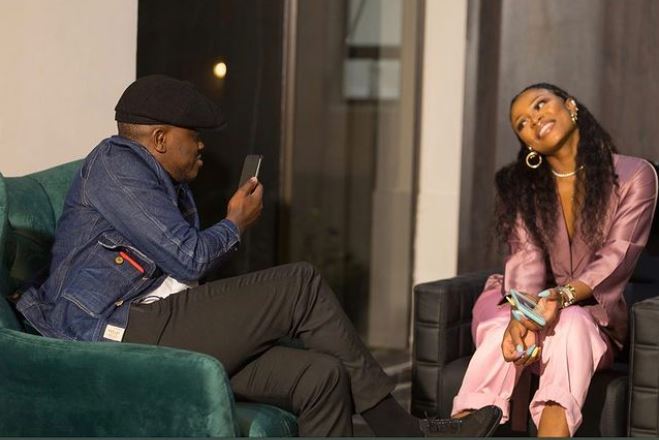 DJ Zinhle has revealed how her bae Black Motion's Bongani "Murdah Bongz'' Mahosana showed her he liked her and how his gesture swept her off her feet.

While engaging with fans on Instagram recently, the DJ asked followers: “What do you wanna know?”

Zinhle seldom hosts an IG Q&A because she's notoriously private and fans never miss an opportunity to ask personal questions. But when the rare opportunity presented itself, one fan took a chance and asked the DJ about her relationship with Bongani..

The curious fan asked: “How did Bongani show you he likes you?”

Zinhle decided to share the cute story of how Bongani swept her off her feet.

She explained how Bongz made a song for her by sampling an old letter she wrote to her father just after he died in 2010. Bongani found the letter in her collection and made a new record.

“I found a vinyl record from my old collection. On the cover was a letter I wrote to my dad after he died in 2010,”

“I don’t even remember writing that letter but I was super emotional when I found it. Bongani took the record, sampled it and made a song for me,” she said. 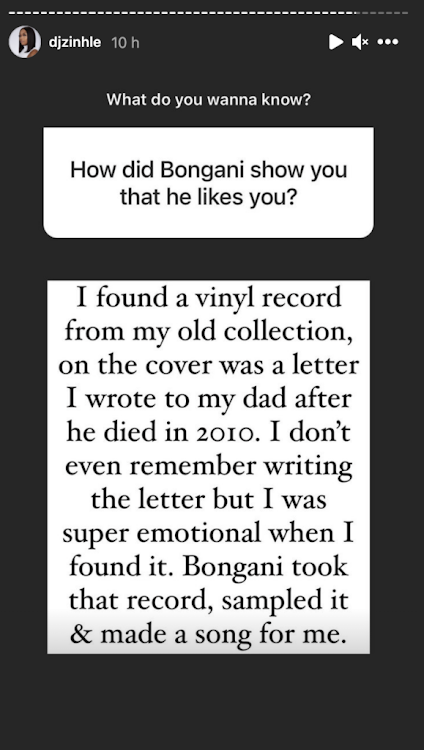 While Zinhle and Murdah have never officially confirmed swirling speculation that they're an item, their social media posts speak a thousand words.

The pair don't skip a beat when it comes to publicly supporting each other and have been serving #couplegoals to fans.

It became evident the pair have moved past trying to keep their romance out of the public eye when Zinhle took to her social media last month to join millions of fans to wish Murdah Bongz happy birthday.

The DJ's simple message stood out as the most personal and sweetest for fans of the pair.

“Wishing you a birthday that is as out of this world as you are. I am so incredibly thankful for you. Happy birthday my love,” said Zinhle.

“At this stage, there are no plans for a reality show with DJ Zinhle and Showmax,” Showmax head of content Candice Fangueiro said.
TshisaLIVE
5 months ago

‘She is like the morning star’: DJ Murdah's cute love note to DJ Zinhle

Black Motion's Bongani “DJ Murdah” Mohosana is smitten and in love with DJ Zinhle, calling her "his heart" and "morning star".
TshisaLIVE
8 months ago

DJ Zinhle's fans have filling up her IG comment section with questions around whether she's pregnant.
TshisaLIVE
6 months ago