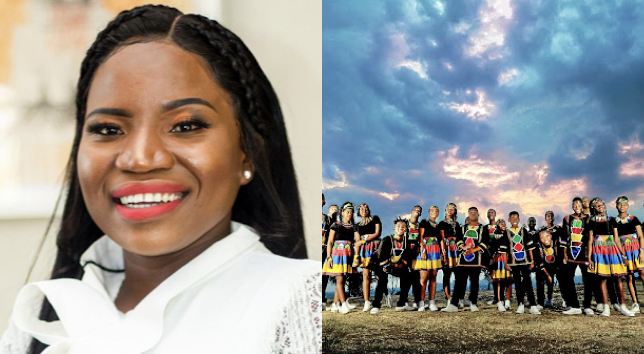 SA's well-beloved Ndlovu Youth Choir have given fans a taste of their performance power after performing the controversial hit single Ghanama by Makhadzi featuring Prince Benza.

Taking to Instagram with a video of their performance, choir members were dressed in white and multicoloured accents singing Mzansi's hottest track to drop recently. They joined in the #GhanamaChallenge along with hundreds of Mzansi fans who were living for the Limpopo-born star's latest drop.

In the video, the choir are seen getting down to Makhadzi's moves and harmonising on the beat.

Check out the video:

Awestruck by the dedication, Makhadzi took to social media to thank the choir for covering her song with their gusto and unique sound.

“They nailed it Ndlovu Youth Choir, thank you for your love. Let's continue streaming Ghanama,” she wrote.

Though the song has now gained popularity among SA at large, Ghanama had a controversial start after beef between Makhadzi and King Monada, who both claimed it was theirs.

After fans caught a glimpse of the pair working on the song in the studio together, many were hopeful for the future of Limpopo excellence. However, things took a sour turn when it was revealed that the pair were fighting over the ownership of the song in Facebook LIVE videos.

At first, the pair claimed that the beef was a publicity stunt but later backtracked, saying they were trying to cover up the bad vibes. In a Twitter thread, Makhadzi revealed her side of the story.

“The agreement was that we would do two songs and the other one will be his. I started promoting the one that's mine and there's where the problems started. We both [went] live and said some unfortunate things.

“I finally agreed with him for us to share the song 50/50 because I am the composer of the song I requested him to start with my name Makhadzi and King Monada and he didn't have a problem with that. We agreed that to rest this case let's all say it was a publicity stunt for him to not look bad,” said Makhadzi.

Comparison between Sho Madjozi and Makhadzi has Mzansi wrangling about colourism

It’s been a great year for Ndivhudzannyi “Makhadzi” Ralivhona, and she made sure to celebrate her next in style.
TshisaLIVE
10 months ago

It appears that King Monada and Makhadzi remain at loggerheads over their track 'Ghanama'.
TshisaLIVE
10 months ago