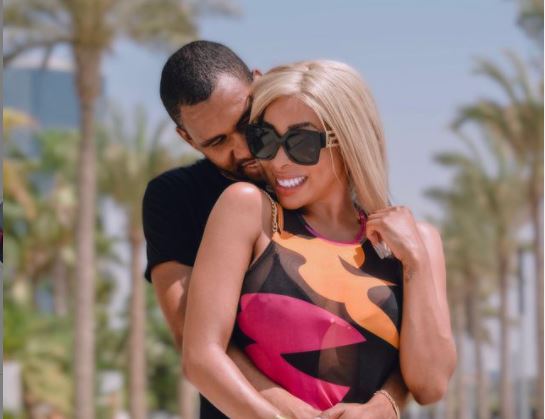 Fans and loved ones have shown their concern for Khanyi Mbau after her bae said he could not find her in Dubai.
Image: Instagram/Khanyi Mbau

Media personality Khanyi Mbau has responded to TshisaLIVE to say that she is “well and alive” and not “missing” as alluded to by her boyfriend Kudzai Mushonga on his Instagram Live Stories that have gone viral.

South Africans were left concerned for the media personality's safety after her boyfriend  said he had apparently not seen her since “dropping her off at the salon” where they are currently on holiday in Dubai, UAE.

“I am well and alive, thank you. I appreciate you all,” she wrote.

See screenshot of the response below: 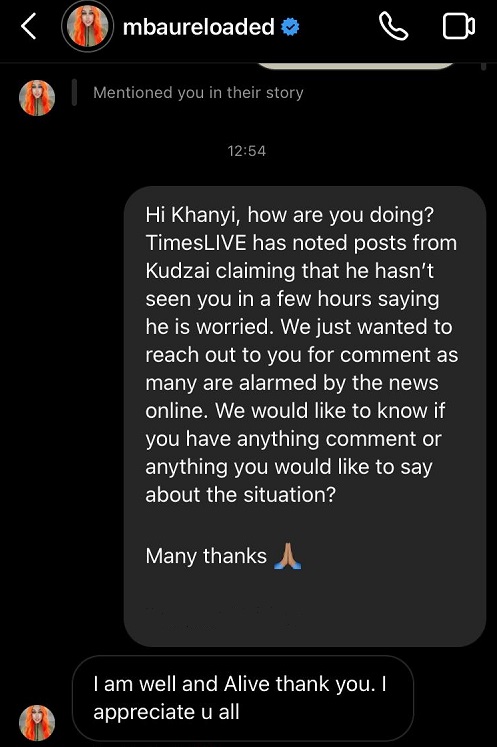 Khanyi and Kudzai had been living their best lives in the UAE, where they have been on vacation for the past couple of days. The social posts have been nothing but lovey-dovey as they lived the luxe life engaged in many adventurous activities.

Kudzai took to Instagram with a post detailing how he had dropped Khanyi off at a hair salon at 6pm. After making her dinner and not hearing from her for several hours after sending many texts, Kudzai said he was concerned.

Read his full IG rant below: Khanyi had not posted anything on her social media platforms regarding Kudzai's posts.

This led to a wave of panic from her fans, who took to Twitter to express concern over the whereabouts of the actress, with many worried for her safety in a land far away from home.

While the usual trolls made a joke out of the matter, the number of women who have gone missing in SA left Khanyi's fans worried about her and concerned for her safety. However, the uncertainty around how valid Kudzai's posts are also left tweeps wondering if the post was real.

Check out the tweets under the trend here.

Many took to her brother Lasizwe's TL to ask questions about Khanyi's wellbeing, as her own social media had days-old content.

However, the reality TV star didn't say much, apart from expressing his own worry.

“I’m hope I am not overreacting, I’m scared,” Lasizwe tweeted at the time.

I’m hope I am not overreacting, I’m scared.

TshisaLIVE reached out to Kudzai for comment. However he had not responded by the time this article was published. This article will be updated should he revert.

“This breaks my heart, not only because you are my brother but how a good gesture could turn so bad and we forget the intention behind Lasizwe ...
TshisaLIVE
8 months ago

The comedian wasn't living for the comparison!
TshisaLIVE
9 months ago

"My eyes are constantly filled with tears, tears of joy from the disbelief of how my life has turned out. I said I want Dubai you said 'Let’s go ...
TshisaLIVE
9 months ago