'Why is she sabotaging her career?' -Tweeps drag Makhadzi for 'ANC-inspired' outfit 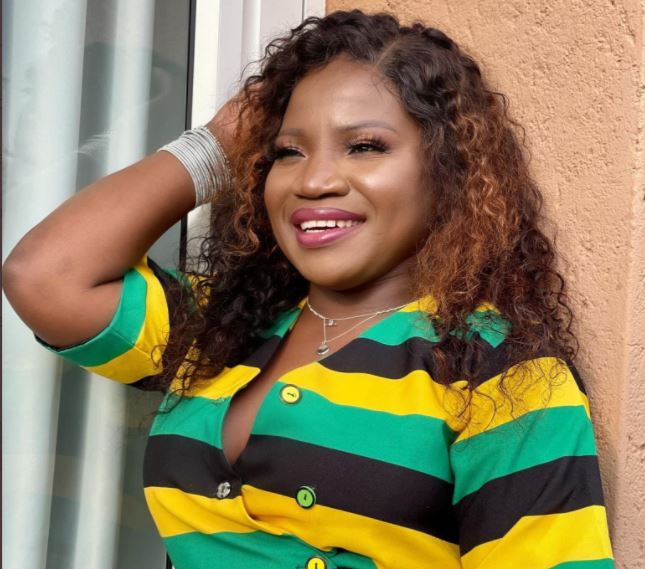 People on Twitter are convinced that musician Makhadzi has made her political affiliations clear after a picture of her wearing a dress with ANC colours — green, yellow and black — went viral on the TL, igniting a debate about whether her “declaration” is wise.

The stunning picture, wherein Makhadzi wore a dress in the political party's colours, is from the past weekend where Makhadzi had the chance to meet President Cyril Ramaphosa and perform in Limpopo during the ANC’s rally in her home province.

While Makhadzi didn't personally post anything to do with the performance, the dress or meeting the president, her stan accounts shared images and videos from the event which landed on Twitter to mixed reactions from tweeps.

Watch a clip from the rally below:

Makhadzi was booked by the ANC for an event that was led by the president in Polokwane.

Others are invited to give speeches🥲 pic.twitter.com/HIWGjDPQ12

Anti-ANC tweeps were left hot and bothered that the Red Card hitmaker is a “supporter” of the ANC, while others didn't care about her political affiliation, adding that she was making bread for her family.

Her association with the ruling party also seemed to bother controversial poet Ntsiki Mazwai, who weighed in on the trending topic, asking why Makhadzi was “sabotaging” her career.

"I adore Makhadzi and think she is very special.... I just don't want her to be used by politicians," Ntsiki later added.

TshisaLIVE reached out to Makhadzi and her management for comment but they did not respond by the time this article was published.

Why is Makhadzi sabotaging her career???

I adore Makhadzi and think she is very special.... I just don't want her to be used by politicians.

Here are some of the reactions to Makhadzi in green, yellow and black colours:

No one will ever refuse an invitation from the president of the Country himseld. Y’all will dress to impress hau…

Makhadzi is wearing my enemy's colours. Let me delete her music 🚮 pic.twitter.com/NTelEmDKpy

I will not be part of the intolerance on our artists are human beings the need to survive. @MakhadziSA is trying to make a living and her political choice ought to be respected. @EFFSouthAfrica members should never be tempted to adapt @MYANC stupid behaviour #VoteEFFOn1November pic.twitter.com/3kP7luTgwC

— Advocate of the footsoldiers (@SenamelaThabo) October 25, 2021

Words cannot even begin to express how I feel about this woman 🖤💚💛✨ @MakhadziSA ⚫️🟢🟡✨ ⬛️🟩🟨✨ pic.twitter.com/FW4UfCYK8T

Cyril Ramaphosa is destroying Makhadzi's brand by involving her in Politics. The ANC criminals will do anything to convince people to vote for them. They don't care about anyone, they just want votes pic.twitter.com/5Z3IOChXUe

"I was blessed with 10k on stage. Your love is too much," Makhadzi shared.
TshisaLIVE
1 month ago

Makhadzi felt the love in KZN — thanks DJ Tira for making it happen for her!

"DJ Tira, thanks for bringing me in KZN for the first time ... The love I received yesterday is too much," said an excited Makhadzi.
TshisaLIVE
1 month ago

ANC president Cyril Ramaphosa on Saturday said he was not worried that his face and not those of ward candidates has dominated the party’s election ...
Politics
1 month ago