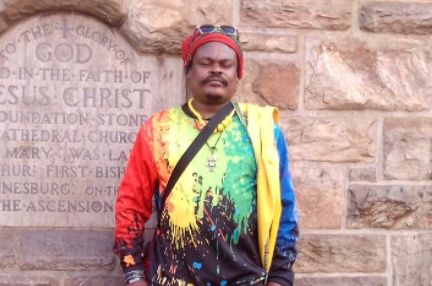 Artist Lebani “Rasta” Sirenje landed on the top trending list on Tuesday but this time it was for all the right reasons as the painter got praised after featuring in an advert.

The Zimbabwean-born artist who often has tongues wagging for painting portraits of renowned people that often don't resemble the subject, had many inspired after he was featured in the latest Chicken Licken advertisement.

In the advert, Rasta plays a character seeking employment as a sketch artist at a police station and his interviewer then imagines getting a backlog of unsolved cases after struggling to apprehend the correct suspect when seeing his work.

“I'm so impressed and happy to be part of it. I wasn't offended by being a part of the advertisement because it's work. I felt honoured. There will always be people loving it and disapproving of things I do but I'm here because of my fans,” Rasta told TshisaLIVE.

This advert marks his second acting gig after his first commercial with Ballantines and now he's looking to further his career in the arts industry.

“I would love to be an actor. Growing up I always loved being at the theatre at school, I was part of the choir in primary, so I love theatre and music and anything in art. So I might find myself acting one day.” he chuckled.

Black Brain's Diep City series features his paintings of the late legendary artists Brenda Fassie, Lebo Mathosa and Mandoza around the set, which he looks at as yet another nod for the hard work he's put in over the past 21 years.

“Big up to Mandla N from Black Brain Pictures for that my name just pops up after the show so I'm happy about that.”

The father of two says his daughters Angelic and Angel are just as artistic as he is and are his biggest motivation to keep going.

“I think it's in me and my family so whenever they see me improving in any way they like it. They are the reason that I'm pushing like this because perhaps without them, I'd probably be someone else. They are the ones that comfort me when people criticise me.”

While all the attention is on him, Rasta says his fans should anticipate his clothing line launching in the next week.

Mzansi sang his praises for his courage for being a part of the commercial and having a relentless spirit.

Take a look at the reactions below:

That chicken licken ad with Rasta is a winner 😂😂😂😂😂

I’m so happy for Rasta for real😂😂 pic.twitter.com/st2rIdBeY2

Brilliant work by Chicken Licken as always 🤩 They allowed Rasta to be Rasta 🤣🤣🤣 https://t.co/hxpNEOHSjQ

😂 😂 😂 RASTA IS FINALLY GETTING PAID FOR HIS CRAFT. https://t.co/GprHKHRRlH

Rasta made ad our artist of icons https://t.co/7FIrQyZJwa

Artist Lebani Sirenje, who is renowned for painting portraits of prominent South Africans at their funerals, enthralled mourners with two paintings ...
News
4 months ago

Rasta paid his respect to young star Killer Kau, who died in a car accident on August 7.
TshisaLIVE
9 months ago

‘Am I the only one seeing Mmusi Maimaine?’ — Rasta’s depiction of Shona Ferguson agitates fans

Rasta has again upset mourners with a painting of 'The Queen' star Shona Ferguson.
TshisaLIVE
9 months ago

What do you think of his portrait?
TshisaLIVE
10 months ago