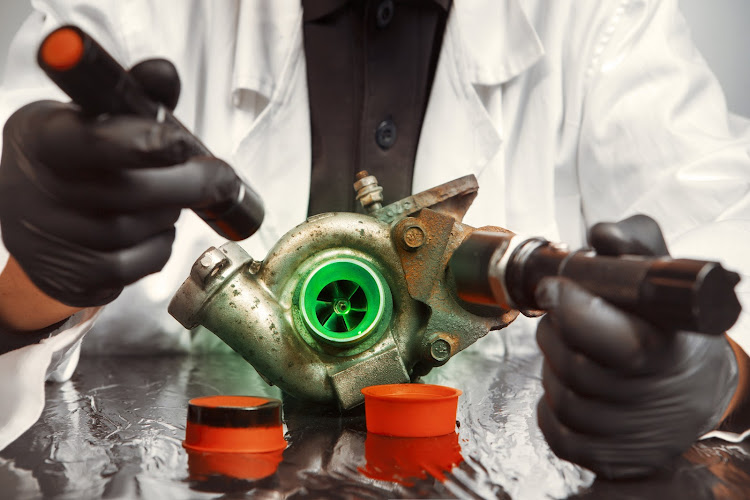 Despite advances in turbo technology, a turbocharger remains susceptible to damage from dirty or poor quality engine oil, and from grit in the intake air due to an ineffectual air filter.
Image: couperfield / 123rf

For any new car owner, the first real failures, not just niggling imperfections but genuine failures of his pride and joy, are always the most painful. What are the first things one should expect to have to replace or repair?

For our present purposes we omit standard maintenance items like tyres, brake pads, the starter battery, filters and silencers. We look at things in the engine and transmission that are known to sometimes pack up sooner than expected.

It is true engines and transmissions (except for clutches on manual transmissions) are covered by the factory warranty on a new vehicle, but a warranty claim always involves some inconvenience, and if your shiny new chariot packs up in the bundu, far from the nearest dealership, a factory warranty will be cold comfort.

Looking at the engine first, modern production practices ensure factory faults are highly unlikely. Machining tolerances are closer than in the past, and a system of automated checks at every stage of building an engine makes it almost impossible for negligence to occur.

However, at the same time engine manufacturing became more foolproof, electronics in the form of sensors, control modules and different kinds of servo motors entered the picture. The curve showing the failure rate of electronic devices as time progresses has a well-known, bathtub shape. There is a fairly high initial rate (the steep part of the bathtub, at the taps) due to “infant mortality”. The failure rate then drops sharply and bottoms out to a long stretch of almost zero failure (the flat bottom of the tub).

Finally, after a good few years, the failure rate starts to rise gradually (the end of the bathtub furthest from the taps). For new vehicle owners, the infant mortality is the worrying part.

Unavoidably, a small percentage of cars will have problems with their electronics within a few weeks of leaving the showroom. It will probably not be a catastrophic failure, but something on the car will go awry.

The most likely systems to be affected are:

Once past the danger period of the first few months, the electronics are on their lengthy run of (hopefully) utter reliability. Failures that crop up now are usually due to mechanical or material failure, unless you were unwise to allow damage to wiring connections, something which remains vulnerable throughout the life of a vehicle. The chief menace is probably water penetration, with car washes the prime suspects.

The mechanical failures start with overheating. Some modern engines make extensive use of plastics for engine ancillaries, and it seems these are not always adequately tested for long-term durability in the hostile environment of an engine. Thus we now have plastic water pumps which start to leak long before they should. As a weight-saving measure, coolant capacity has also been reduced to a minimum. An undetected water leak rapidly leads to serious overheating, followed by a warped aluminium cylinder head.

Turbochargers are probably next in line for failure. Despite advances in turbo technology, a turbocharger remains susceptible to damage from dirty or poor quality engine oil, and from grit in the intake air due to an ineffectual air filter.

When we turn to early problems in the transmission, there are, broadly speaking, four types of transmission in common use currently: the traditional manual gearbox with a gear-lever and clutch; the tried and tested automatic gearbox with a hydraulic torque converter;  the multitude of semi-automatics using a conventional gearbox and dual clutches, but with gear-changing performed automatically at the instruction of a control module and; the Continuously Variable Transmission (CVT), using a belt and two pulleys.

The old style manual gearbox is the most rugged and reliable, and also the cheapest to build and maintain. The clutch(es) on manual boxes and the semi-automatics should be regarded as wear items. They can last 200,000km under a sympathetic driver or 20,000km under an insensitive or inept operator. The semi-automatics and their mechatronics control units had a bad reputation at first.

They have apparently been improved, but they employ advanced electronics which can and do act up. The teething problems of CVTs have reportedly been overcome, but require horribly expensive oil and a replacement of the belt at a time when a manual gearbox is nicely bedded in. Some single clutch units on modern cars use dual-mass flywheels, which unfortunately introduce another easily wreckable wear item in the transmission. Solid flywheels seldom needed replacement, but for some reason they weren’t good enough.

The lessons one learns from the foregoing are:

Motor vehicles have their own tricks, as we all know. They are apt to malfunction, misbehave and randomly fail, often with little or no prior warning.
Motoring
1 month ago

Anybody who has made a road trip during which it was necessary to venture off the N-routes will be aware of the appalling condition of secondary and ...
Motoring
2 months ago

CAR CLINIC | Behind the scenes at Ford’s Struandale engine plant

In 1964 Ford Motor Company of Southern Africa opened an engine plant, as opposed to an assembly plant, in Struandale, Gqeberha in the Eastern Cape.
Motoring
3 months ago