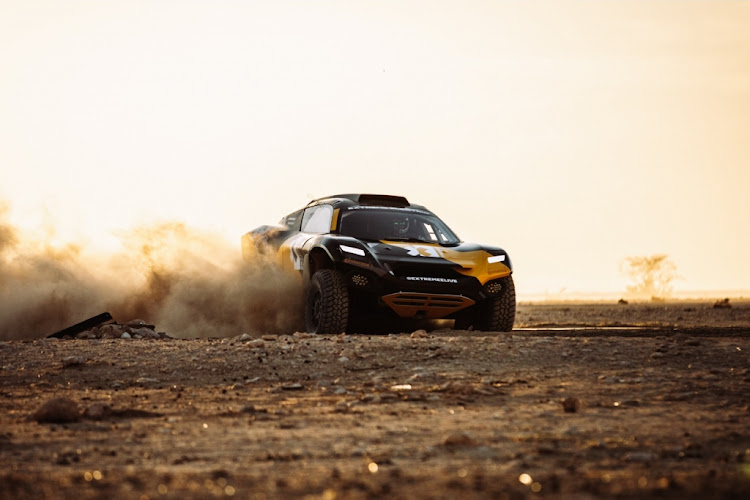 The first round of the Extreme E championship was held in Saudi Arabia this past weekend.
Image: Supplied

Andretti United, run by Michael Andretti and McLaren F1 boss Zak Brown, were second in the three-car final with Sweden's Timmy Hansen and Britain's Catie Munnings 23.73 seconds off the pace.

The seven times F1 world champion, who did not attend, sent a good luck message on Instagram before the race, expressing his pride in what they had done so far.

Jenson Button, the 2009 Formula One champion, finished sixth after his JBXE team failed to make the final, while triple Dakar winner Carlos Sainz was fourth.

Time trials had started on Saturday, around a sandy and rock-strewn track that also featured a plunging drop amid the dunes.

Extreme E aims to highlight climate change and promote sustainability by racing in remote parts of the world affected by global warming or suffering environmental damage.

There are five rounds, ranging from locations in the Arctic to the Amazon, and every team must field a male and female driver.

The next race is in Senegal in May.

Round one to Hamilton but Red Bull’s Verstappen is lurking

Formula One champions Mercedes say their car is not stronger than Red Bull in any one area despite Lewis Hamilton winning Sunday's season-opening ...
Motoring
2 weeks ago

After the Covid-19 pandemic truncated the 2020 season and forced organisers to hold all 14 races in Europe, MotoGP hopes to fire on all cylinders in ...
Motoring
2 weeks ago
Next Article