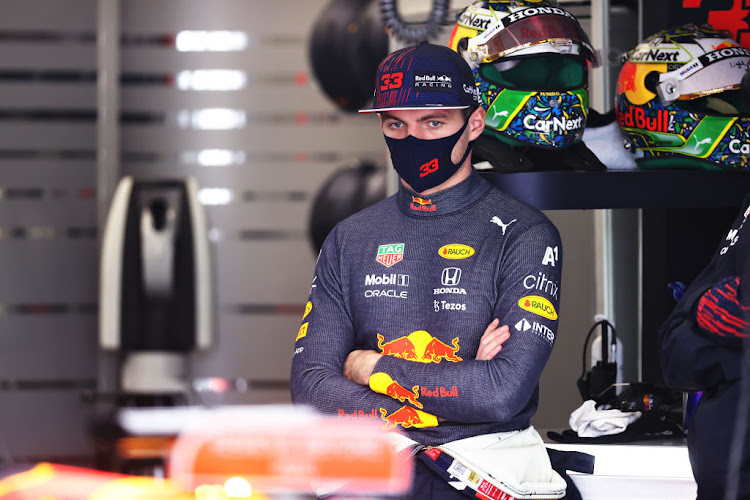 Max Verstappen Looks on in the garage during practice ahead of the F1 Grand Prix of Brazil at Autodromo Jose Carlos Pace on November 13, 2021 in Sao Paulo, Brazil.
Image: Lars Baron/Getty Images)

After the session on Friday Verstappen inspected the rear wing elements on his car and Hamilton's Mercedes, touching them with his hands.

Later that afternoon the governing FIA revealed that Hamilton's car had failed a technical inspection by a matter of millimetres.

The Briton risks being sent to the back of the grid or forced to start in the pitlane for the sprint race. He also already has a five place grid penalty for Sunday's grand prix due to an engine change.

The stewards said in a statement that Verstappen had breached article 2.5.1 of the international sporting code. The article covers behaviour in the secure 'parc ferme' area after qualifying.

It stipulates that no unauthorised "operation, checking, tuning or repair is allowed."

In-car footage and video filmed by a fan was looked at by stewards as part of the hearing.

It clearly showed Verstappen getting out of his car, removing his gloves and putting his right hand into the slot gap of the Red Bull's rear wing. He then moved to the Mercedes and did the same, touching the rear wing in two places.

The stewards' report said there was no movement of any of the wing elements of Hamilton's car when touched with what they described as "insignificant force".

"It is clear to the stewards that it has become a habit of the drivers to touch cars after qualifying and the races," it added.

"This was also the explanation of Verstappen, that it was simply habit to touch this area of the car which has been a point of speculation in recent races between both teams.

"This general tendency has been seen as mostly harmless and so has not been uniformly policed. Nevertheless, it is a breach of the parc fermé regulation and has significant potential to cause harm."

Stewards decided a fine was sufficient on this occasion but warned teams that future incidents could incur different penalties.

Red Bull team boss Christian Horner earlier told Sky Sports television that his cars had been on the receiving end of similar hands-on treatment in the past.

"We’ve had drivers pull our clutch paddles, we’ve had heads in cockpits, we’ve had front wings tested, tyres pushed, cars rolled around. It’s not something that’s unusual. It’s never been brought up or even discussed previously," he said.

Lewis Hamilton will take a five-place grid penalty for Sunday's Sao Paulo Grand Prix in another blow to the Briton's hopes of winning a record eighth ...
Motoring
6 months ago

McLaren's Lando Norris paid tribute to his boyhood idol Valentino Rossi on Thursday and revealed they had exchanged text messages ahead of the ...
Motoring
6 months ago