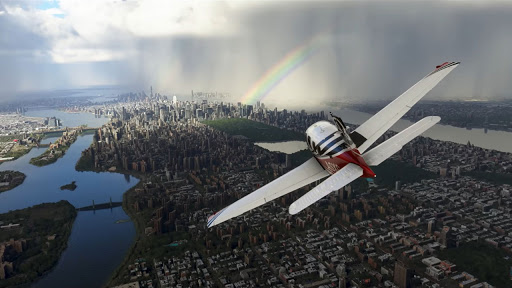 The physical copy of Microsoft’s latest Flight Simulator comes on 10 DVDs if you want to avoid the 90GB download and have some shelf space that needs filling.

The physical edition of Microsoft Flight Simulator is being distributed by Aerosoft in Europe (only), and comes as 10 double-layer DVDs with a handy manual made up of actual pages that you must move to continue reading. It will be exactly the same content as the downloadable version, for a similar price, just in a state more vulnerable to cats and other agents of chaos.

Microsoft Flight Simulator will let you fly all manner of aircraft, from light planes to chonky jets, around a dynamic, living world, including cities, full of mountains, rivers, roads, people and animals. You won’t be travelling anywhere any time soon, so you might as well simulate it.

Microsoft Flight Simulator’s ETA on PC and Xbox One is set for August 18 2020. Please be reminded that the snacks are not complimentary.

What’s the biggest game you remember playing? Mine’s 1995’s Phantasmagoria, which came on seven discs and gave me nightmares.

Soon, you’ll be able to watch Norman Reedus pee on all the things in 4K and 100fps, just like real life.
News
1 year ago

The upcoming Shadowlands expansion for World of Warcraft will make gender changes free for all players.
News
1 year ago