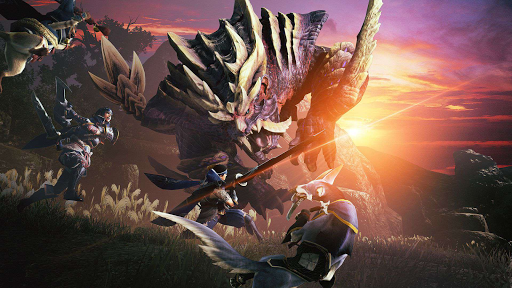 Monster Hunter Rise wasn’t a game I’d expected to fall head over heels in love with. I wasn’t even really expecting to like it, to be honest, because I played quite a bit of Monster Hunter World and didn’t enjoy it at all. And starting out again as a new Hunter in Kamura Village, this game’s almost immediate and disorienting dump of mechanics and systems and NPCs didn’t help much to change my mind.

But I didn’t hate it. And over time, Monster Hunter Rise’s core loop – choose a mission, eat some food, kill a monster and dissect it for parts, talk to the villagers, craft or upgrade some gear, repeat – became sort of… fun? Actual, for real fun, and lots of it. New locations, NPCs, and mission types were subsequently introduced at a more comfortable pace, plus some new traversal gadgets to keep things interesting. Monster Hunter Rise also debuts the new Rampage mode, a sort of siege mode in which you must build defences and coordinate with NPCs to survive a mob of monsters. It’s chaotic and hard, but the loot is totally worth it.

The game’s various environments and biomes are fantastic too, with a new emphasis on vertical scaling – and although the maps are large, getting around them is now made much easier and faster with your Palamute, Monster Hunter Rise’s new, very good boi, doggo-like companion who, conveniently, is also a mount. You can even dress him up, if you’re into that, and everybody is into that, don’t even pretend you’re not. You can also retain the services of a Palico, just like previous Monster Hunter games, and they remain adorable as ever.

(For some reason, Gareth forgot to mention that the Palico food vendors in town are super adorable too, and they sing and dance when they’re cooking. I think this is absolutely, obviously Monster Hunter Rise’s most important feature, but this isn’t my review so apparently my opinion is irrelevant or whatever. I’m editor, though, so here’s a passive-aggressive screenshot instead. – Tarryn) 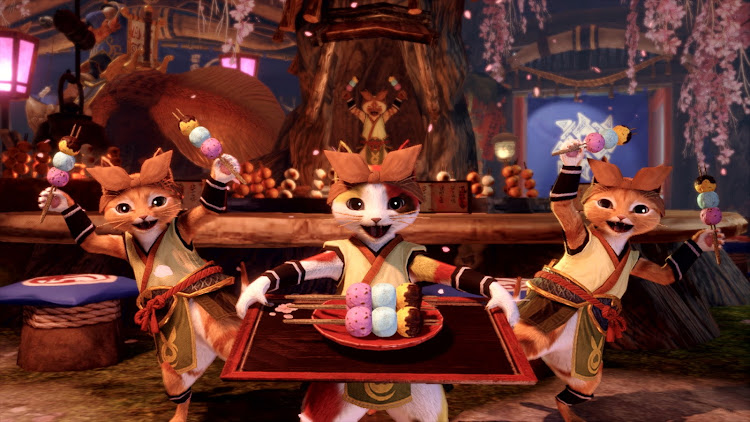 You can also retain the services of a Palico, just like previous Monster Hunter games, and they remain adorable as ever.
Image: Supplied

And lastly, where I feel that Monster Hunter Rise really shines is its co-op multiplayer. Yeah, it’s still not exactly simple, drop-in, drop-out like most other games, but now once you’re partied up, at least you see your friends all the time, including in the village and not just out on missions. Very little in this game brings me as much breathless, frantic glee as a fight where me and three of my besties collectively stun-lock a massive monster, beat it to pulp, and promptly rip it to pieces for all the best body parts. Those are #forever memories.

BOTTOM LINE
Despite its intimidating start, Monster Hunter Rise won me over with addictive and consistently dynamic gameplay, and exhilarating co-op multiplayer.
PROS
Gorgeous design
Multiplayer improvements
So much fun!
CONS
Waking up every morning and remembering that Palamutes are not real.

Today is probably the first time you’ve even heard of Lost Souls Aside, but after you see the video footage below? It’s probably going to be on your ...
News
5 days ago

With all hands on deck currently to fix the current mess that CDPR’s leadership pushed out, the big boss of the studio is still optimistic that ...
News
2 weeks ago

That’s the idea behind Gord from developer Covenant. Dev. A single-player adventure and strategy game, players will have complete quests and manage a ...
News
1 week ago
Next Article