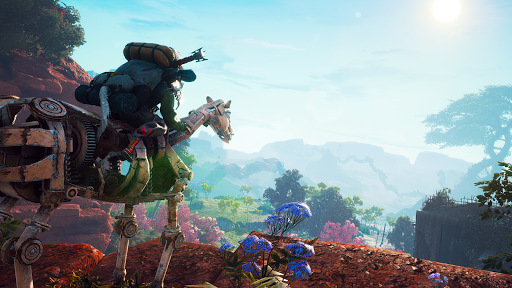 The word “wonderful”, like “awesome” and “epic”, has become a cliché. For a generation of screen junkies and timeline marketing campaigns, everything that isn’t obviously a toddler choking hazard can and must be wonderful – from #gluten-free #kale and #broccoli #smoothies to #working six jobs on the weekend just to make the minimum payment on your credit card debt so you don’t have to quit your unpaid internship at MegaCorp, Inc. for the endorsement on your next rental application. But wonderful, by definition, is evocative. It describes an emotional response, the dreamy nostalgia of some half-remembered, wish-upon-a-star naïveté from when you were a kid, maybe, before the cynicism and existential exhaustion of adolescence made you decide to choose business science over archaeology for the medical insurance incentives. The what-if, not the what-is.

Biomutant is wonderful like that. Up to and including the moment that you wake up, it’s Monday, and you’re 43 with no retirement savings. #WONDERFUL.

It’s the post-apocalypse. But it’s not the post-apocalypse of most video game conventions – this post-apocalypse has lots of colour and empathy and optimism for the future, so I guess it’s no coincidence that actual humans aren’t involved. In this post-apocalypse, the meep has inherited the Earth. No toilet paper? No worries. For the protagonists of Biomutant, the conveniences of consumer culture are now a toxic dump. Or, from time to time, a puzzle to solve for XP. It’s probably metaphorical.

Reviewed by Luke Reilly on Xbox One X. Also available on PlayStation 4 and PC.

But if Biomutant subverts the rules of what exactly constitutes a post-apocalypse, most of its other features aren’t so unique – it’s an Assassin’s Creed game with some Metroidvania mechanics and basic combo-focused combat like Darksiders or Rocksteady’s Batman series, but the so-cute-omg stat is dialed up to TURBO SQUEEEEE. Don’t get me wrong, though, because Biomutant is a lot of fun. Just don’t expect the game to totally reinvent RPGs.

What makes Biomutant so special, so wonderful even, I think, is its non-linear design and unpredictable diversions. You could complete the game in about 10-15 hours, if you had to, but you’d miss out on so much. Every bump on the horizon is a prospect for extra plot exposition, opportunity, or new loot builds. I clocked over 60 hours playing this game, but after reloading my pre-finale save to finish up some 30+ side missions I’d skipped for the review deadline, I met an NPC who introduced an entirely new dynamic into the mix. Oops, lol.

So it sucks that Biomutant occasionally trips up on reality. The open world sandbox is a disorganised mess without enough fast travel destinations, for example, and it took me forever to realise that, actually, there’s no vertical traversal tool. And with a limited number of combos that are more or less the same for every weapon, the combat gets kind of monotonous. It’s not bad, it’s just… inconsistent, you know? Biomutant is wonderful until it isn’t. But it’s mostly wonderful.

BOTTOM LINE
A vibrant, whimsical genre mutation, if you can excuse one or two pimply-woozles.
PROS
SO CUTE OMG
Fantastic world-building
A different sort of post-apocalypse

Subnautica: Below Zero presents the player not only with a harsh tundra to live in but the icy depths underneath it all.
News
3 weeks ago

There's a lot going on over at South African tournament organizer Mettlestate from the Soccer Laduma League to the ROG Invitational III tournament, ...
News
3 weeks ago

Hit that subscribe button, Twitch is getting local subscription pricing

Twitch has finally realised that the US dollar isn’t everything and is rolling out Local Subscription Pricing around the world. Yes, including South ...
News
3 weeks ago