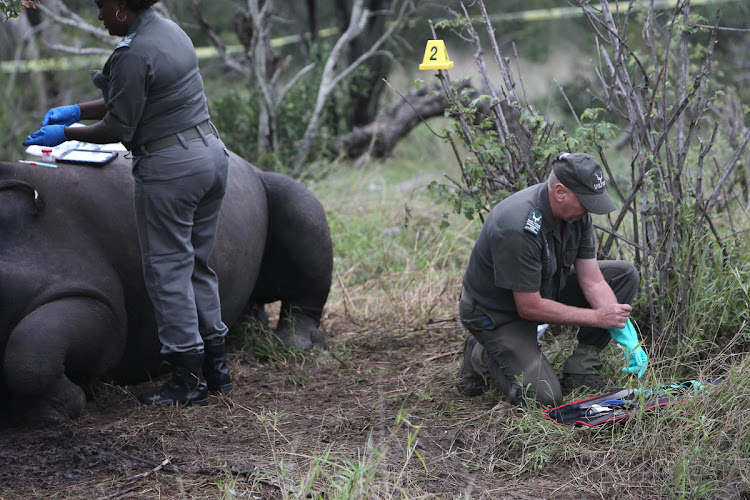 Members of a forensics perform an autopsy in an attempt to collect evidence at the scene of a recently poached Rhino at The Kruger National Park in Mpumalanga. File Photo
Image: Alaister Russell/The Times

When suspected poacher Joseph “Big Joe” Nyalunga was stopped by police somewhere between Nelspruit and Gauteng‚ it appeared they were too late.

Investigators found bags that they suspected had held rhino horn‚ but they were empty. The horn had allegedly been passed on to the next rung in the rhino poaching industry in its preparation to be exported out of South Africa.

But investigators hoped they might still be clues left in the bag‚ so they sent them to the Veterinary Genetics Laboratory at the University of Pretoria in South Africa.

“In those bags was basically dust‚” explains Dr Cindy Harper‚ of the Veterinary Genetics Laboratory.

But Harper and her colleagues were able to tease DNA from the dust and link it to two dead rhinos that were found poached in the Kruger National Park.

The "dust case" was one of more than 5‚800 forensic investigations that involved the use of the Rhino DNA Index System or RhODIS‚ and it is this crime-fighting tool that is the subject of an article that appeared in the latest journal Current Biology.

The article highlighted how successful the system is in linking rhino horn seized from criminals in various countries to poached carcasses found thousands of kilometres away.

Since 2011‚ when RhODIS was set up‚ it has been used in more than 120 cases‚ where rhino carcasses were tied to either recovered horn or blood-stained objects used in the commission of the crime.

Evidence taken at crime scenes or seized at airports‚ explained Harper‚ is compared to the DNA profiles of tens of thousands of individual rhino.

“The database is not just South African‚ even though the majority of rhino samples and profiles come from here‚” she says. "We also have 10 of the 11 rhino range states who contribute.”

The report in the Current Biology highlighted nine cases where RhODIS was able to make DNA matches‚ and that evidence was used in the successful prosecution of perpetrators.

One case involved three horns that were taken from two rhino that were poached in the Kruger National Park. The Mozambican national responsible was sentenced to 29 years.

RhODIS is just over seven years old and was initiated at a time when no one knew if DNA could be extracted from rhino horn.

“The concept really started when we tried to get an individual DNA fingerprint from rhinoceros horn‚ because people believe that it is just a clump of hair so you couldn't get individual fingerprints from it‚ says Harper. "But we showed it was possible and you could do it from any point in the horn."

Since then the DNA matches to crime scenes have racked up.

But the database isn’t just about forensic cases‚ genetic information is also being used to understand rhino population dynamics. In some instances‚ rhino that are to be relocated are tested to make sure that there isn’t the possibility of inbreeding.

Now Harper and her colleagues are being tested by a new trend where rhino horn is cut up in South Africa and exported as curios‚ usually bangles or trinkets.

“These are difficult to spot‚ but what we do is take samples from these trinkets and we are able to say how many horns were involved in making them. We then link them back to a specific rhinoceros.”

The researchers in the study believe the system could be used increasingly overseas in the international fight against rhino poaching.

Park rangers in Africa’s most famous rhino reserve are going hi-tech to push back against the relentless assault by horn poachers‚ thanks to a ...
News
3 years ago

The Kruger National Park and Mozambican authorities are collaborating in a bid to clamp down on rhino poaching.
News
3 years ago

Instead of clamping down on community members and syndicates who poach rhino in the Kruger National Park (KNP)‚ some rangers are collaborating with ...
News
3 years ago