The social media network already removes tweets with threats based on race, ethnicity and religious affiliation, among others.
Image: AFP PHOTO / LEON NEAL

Twitter has announced that it is moving to filter out inappropriate content based on religion as part of its effort to curb hate speech.

In a policy update, Twitter said it would take down "dehumanising language" that targets specific religious groups.

The social media network already removes tweets with threats based on race, ethnicity, religious affiliation and more, but its recent update sets more precise standards for hateful content based on religion.

“After months of conversations and feedback from the public, external experts and our own teams, we’re expanding our rules against hateful conduct to include language that dehumanises others on the basis of religion,” the Twitter safety team said. 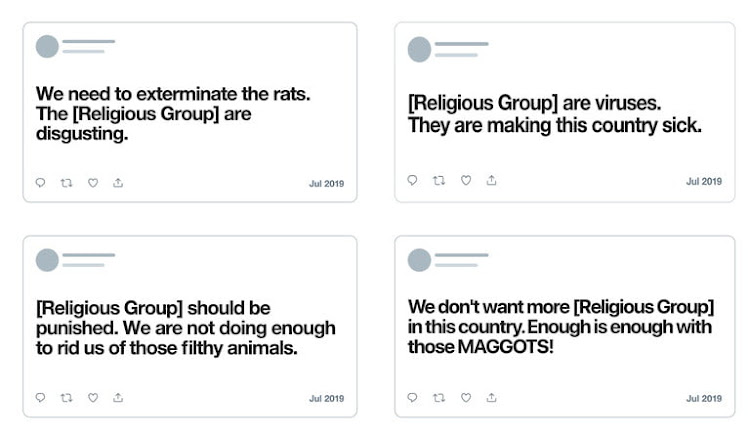 According to the company, tweets [example image above] that break this rule sent before the update will need to be deleted, but will not result in account suspensions.

Last month, Twitter said it would add warning labels to tweets from officials and politicians who violate its rules, a move that will potentially affect the output of political figures such as US president Donald Trump and former DA leader Helen Zille.

The new measure only applies to verified political leaders and candidates who have more than 100,000 followers.
News
2 years ago

As popular as he may be on social media, Julius Malema says it doesn't always reflect reality.
Politics
2 years ago

UKZN on Monday issued a statement in which they confirmed Public enterprise minister Pravin Gordhan's qualifications which he obtained in 1973.
News
2 years ago