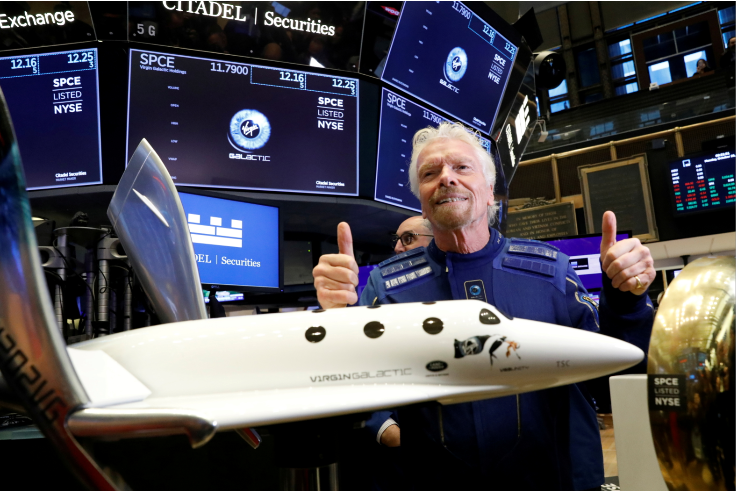 Asked how his family reacted to the news last week that he would join Sunday's crew, Branson said his children - adventurous like him - were excited, but suggested his wife, Joan, while supportive, was more wary.
Image: REUTERS/Brendan McDermid/File Photo

As Virgin Galactic finalises plans for founder Richard Branson to join five others on a test flight to the edge of space on July 11, the British billionaire said his wife may be nervous about the launch but he himself wasn't the least bit afraid.

"I've been looking forward to this for 17 years," Branson said in an interview on Tuesday from Spaceport America near the remote town of Truth or Consequences, New Mexico.

He said pre-flight preparations only add to the excitement ahead of Sunday's scheduled launch, which will be taking place one week before his 71st birthday.

"Every bit about it is a pinch-me moment," he said.

The launch of Virgin Galactic Holdings Inc's VSS Unity rocket plane over the desert will mark the space tourism company's fourth crewed test mission beyond Earth's atmosphere. But it will be the first to carry a full complement of space travelers, consisting of Branson, two pilots and three mission specialists.

Unity will be launched at an altitude of about 50,000 feet from a Virgin Galactic carrier plane, then soar on its own rocket power to the boundary of space, where the crew will experience about 4 minutes of weightlessness before beginning a descent back to Earth.

The trip is not without the inherent hazards of spaceflight. An earlier prototype of the rocket plane crashed during a 2014 test flight over California's Mojave Desert, killing one pilot and seriously injuring the other.

Asked how his family reacted to the news last week that he would join Sunday's crew, Branson said his children - adventurous like him - were excited, but suggested his wife, Joan, while supportive, was more wary.

"My wife is the sort of person who would be terrified on a Virgin Atlantic airplane," he said. "She's the last person who would want to do something like this. But she's known me since I tried to balloon across the Atlantic or the Pacific or around the world, and she still seems to love us."

He laughed as he quoted his wife telling him: "'If you're foolish enough to do these wonderful things, you can do it, but I won't be going to your funeral.'"

By joining the flight on July 11, Branson has positioned himself to beat rival entrepreneur Jeff Bezos into space by nine days.

Richard Branson aims to make space trip on July 11, ahead of Bezos

Bezos, founder of the retail giant Amazon.com Inc, will be on board the suborbital flight of the New Shepard spacecraft of his own private rocket company, Blue Origin, on July 20.

Virgin Galactic and Blue Origin, along with Elon Musk's SpaceX, are competing head-to-head in the emerging space tourism business.

Branson denied he and Bezos were in a contest to see who would go up first, however.

"I just wish him and people going up with him all the very best. I look forward to talking to him about his ride when he comes back," Branson said of Bezos. "I spoke to him two or three weeks ago, and we both wished each other well."

Success for both ventures is considered key to fostering a burgeoning industry that aims to eventually make space tourism mainstream, at least for high-paying customers.

Virgin has said two additional test flights of its vehicle are planned before the company begins commercial service in 2022, and Branson said he anticipates offering paid flights on a "regular basis" next year.

He also said he was confident there was plenty of room in the market for his venture and Bezos' company to compete.

"Neither of us are going to be able to build enough spaceships to satisfy the demand," Branson said.

Musk’s satellite internet coming soon, ‘may reach half a million users in a year’

Musk says may need $30bn to keep Starlink in orbit

Aerospace firms on Thursday credited NASA with a successful Test of engines on a Boeing-built rocket for Artemis missions that aim to return US ...
News
6 months ago