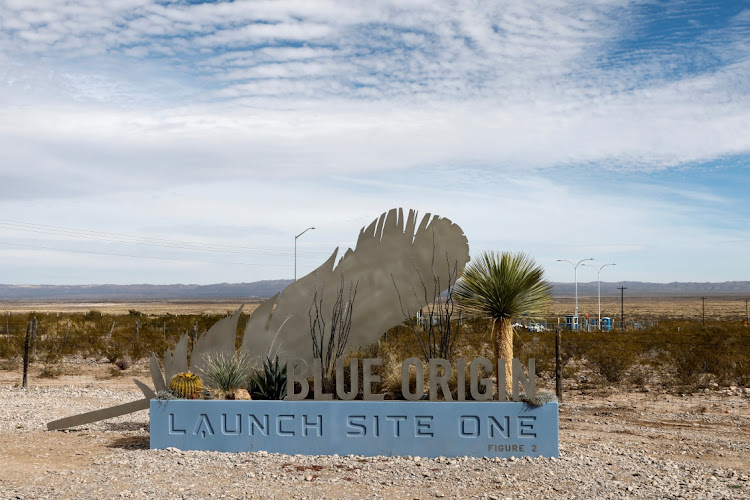 The Launch Site One sign is shown after Blue Origin delayed, for weather, its next New Shepard astro-tourism flight with an all-civilian crew of six, including two non-paying guests of honor, "Good Morning America" co-anchor and former NFL star Michael Strahan, and Laura Shepard Churchley, the eldest daughter of pioneering astronaut Alan Shepard, the first American in space for whom the New Shepard spacecraft is named from Launch Site One in West Texas, Texas, US, December 8, 2021.
Image: REUTERS/Joe Skipper

The eldest daughter of pioneering US astronaut Alan Shepard is set for a ride to the edge of space aboard Jeff Bezos' Blue Origin commercial rocket ship on Saturday, 60 years after her late father's famed suborbital NASA flight at the dawn of the Space Age.

Laura Shepard Churchley, 74, who was a schoolgirl when her father first streaked into space, is one of six individuals due for lift-off at 8:45am. Central time (1445 GMT) from Blue Origin's launch site outside the rural west Texas town of Van Horn.

They will be flying aboard the crew capsule of a fully autonomous, six-story-tall spacecraft dubbed New Shepard, designed to soar to an altitude of about 350,000 feet (106km) before falling back to Earth for a parachute landing on the desert floor.

The entire flight, from lift-off to touchdown, is expected to last a little over 10 minutes, with the crew experiencing a few minutes of weightlessness at the very apex of the suborbital flight.

The spacecraft itself is named for Alan Shepard, who in 1961 made history as the second person, and the first American, to travel into space — a 15-minute suborbital flight as one of NASA's original 'Mercury Seven' astronauts.

A decade later, Shepard walked on the moon as commander of the Apollo 14 mission, famously hitting two golf galls on the lunar surface.

Churchley is one of two honorary, non-paying guest passengers chosen by Blue Origin for Saturday's flight. The other is Michael Strahan, 50, a retired National Football League star and co-anchor of ABC television's “Good Morning America” show.

They are joined by four lesser-known, wealthy customers who paid undisclosed but presumably hefty sums for their New Shepard seats — space industry executive Dylan Taylor, engineer-investor Evan Dick, venture capitalist Lane Bess and his 23-year-old son, Cameron Bess. The Besses are set to make history as the first parent-child pair to fly in space together, according to Blue Origin.

The most recent contributions are in addition to the $791 million he gave to 16 organizations last year as part of his $10 billion commitment to his ...
News
1 month ago

Lunar tunes: China ups the ante in space race with US

Saturday's flight is expected to reach a maximum height of about 65 miles — just above the internationally recognised boundary of space, the Karman Line, which is roughly 62 miles above Earth.

The launch marks the third space tourism flight for Blue Origin, the company Bezos — founder and executive chairman of retail giant Amazon.com — formed two decades ago, and the company's first with a crew of six passengers.

Actor William Shatner, who embodied the promise of space travel in his role as Captain James T. Kirk of the starship Enterprise on the 1960s TV series “Star Trek,” joined the second New Shepard crew in October to become the oldest person in space at age 90.

British billionaire Richard Branson beat Bezos to the punch by nine days when he rode along on the first fully crewed voyage of his own space tourism venture Virgin Galactic Holding Inc, soaring to the edge of space over New Mexico in a rocket plane released at high altitude from a carrier jet.

A third player in the burgeoning space tourism sector, fellow billionaire entrepreneur Elon Musk, inaugurated his SpaceX citizen-astronaut service in September with the launch of the first all-civilian crew ever to reach Earth orbit.