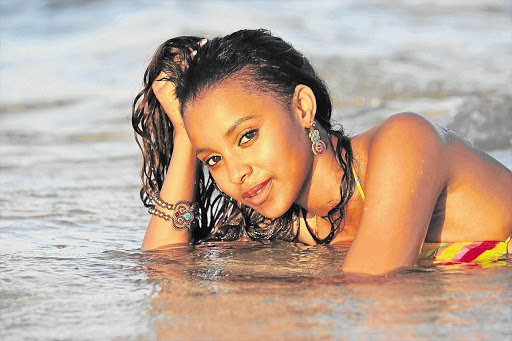 Lizelle Tabane cooling off in Mauritius last weekend. The university student and Malema are said to have started seeing each other not so long ago Picture: SIPHIWE MHLAMBI

Yesterday, Malema declined to comment, saying only: "Whether I was with Lizelle, that is none of your business, all right."

Tabane could not be reached for comment. But the Sunday Times can confirm that she has only been dating Malema, 30, for a short while. The aspiring model is studying project management at the University of Pretoria.

A close friend, who declined to be named, described Tabane, who was raised in Rustenburg, North West, as ambitious. "She never lets anyone stand in the way of her dreams," she said.

The Sunday Times has also established that last Friday Malema and Tabane arrived in Mauritius on separate flights.

Tabane, along with several other guests, landed on the island on a flight chartered by Mabilu, 42, from Air Mauritius.

Malema and the rest of the guests arrived on an Air Mauritius Airbus.

He checked into the exclusive five-star Long Beach resort. Records at the hotel show that two people were booked into his suite. Coordinators of the lavish ceremony - estimated to have cost R10-million - declined to disclose Tabane's details, citing confidentiality. One said that Mabilu had instructed the coordinators to omit her details from the wedding list.

For most of the weekend the pair was spotted smiling, laughing and gently cavorting. On several occasions they were spotted holding hands.

At the wedding ceremony on Saturday, they refused to be photographed as they walked down the red carpet and did not sit together at the reception.

Tabane later joined Malema as he mingled with friends and was by his side as he downed champagne during the alcohol-fuelled reception party.

On Sunday afternoon, Malema emerged from his room and attended a private jazz party on the beach .